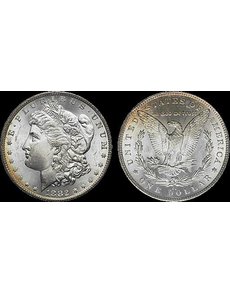 A handsome Mint State 64 1882-CC Morgan dollar that was once part of the GSA hoard and certified as such by Professional Coin Grading Service brought $252.63 at an Aug. 20 Heritage auction.

They were struck in just 13 years between 1878 and 1893, making them an attainable short set for collectors. Thanks to the General Services Administration (GSA for short) sales in the 1970s, a healthy quantity of common issues (specifically 1882-CC, 1883-CC and 1884-CC) exist in Mint State grades to meet collector demand.

For example, an 1882-CC Morgan dollar in its original black plastic GSA case and graded MS-62 by Numismatic Guaranty Corp. sold for $170 at a recent auction. Alternately, a nice Very Fine example of this common CC dollar not in a GSA holder might cost a collector $120 or so, making the Mint State example a solid value by comparison.

Examples not found in large quantities in the GSA hoard, such as the 1879-CC and the 1889-CC dollars, have remained scarce and expensive. An entry-level Mint State 1879-CC Morgan dollar will approach $6,000, while solid Very Fine examples can approach $300.

For the 1889-CC dollar, even the most worn examples in About Good approach $400. A Very Fine 25 example brought $1,175 at a recent auction while an Extremely Fine 40 dollar sold for more than $3,000 at auction earlier this year. Many circulated 1889-CC dollars have problems such as improper cleaning and damage. That, coupled with the presence of deceptive fakes, makes third-party certification of this issue essential.

The entry point for Mint State examples of the 1889-CC Morgan dollar is represented by an ANACS MS-61 coin with light toning that brought $15,275 earlier this year at a Heritage auction. A bright NGC MS-63 dollar realized $41,125 at a Feb. 7 Heritage auction.

For exceptional 1889-CC Morgan dollars, the sky is the limit, as evidenced by the astounding Professional Coin Grading Service MS-68 example that brought $881,250 at an Aug. 15 Stack’s Bowers Galleries auction.

The creme de la creme of Carson City Mint Morgan dollars may be the coveted and rare branch Mint Proofs. They’re typically from 1884 and 1893 and are somewhat mysterious issues.

They generally look like contemporary Proof dollars produced at the Philadelphia Mint and, as they’re studied more, their acceptance in the marketplace seems to grow. One of around four known Proof 1884-CC Morgan dollars, graded Proof 66 Cameo by NGC, sold for $176,250 at an Aug. 9 Heritage auction. A few days later Stack’s Bowers sold an NGC Proof 66 Cameo 1893-CC dollar for $323,125. ¦