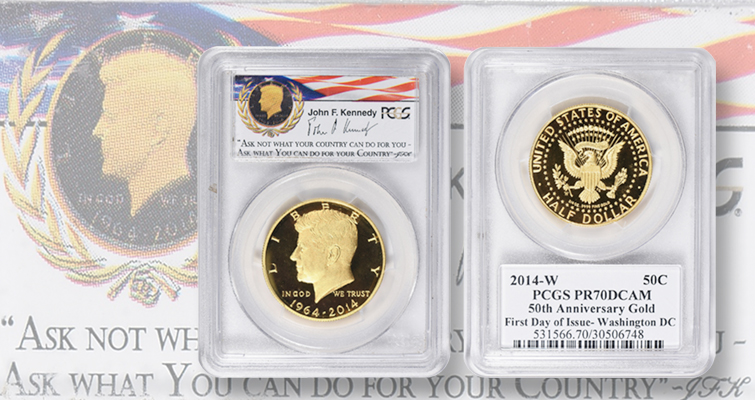 Prices have cooled for First Strike and Early Release 1964–2014-W gold Kennedy half dollars over the past five years. A First Strike 2014 Chicago ANA PCGS Proof 70 Deep Cameo example brought $2,256.10 on Aug. 24, 2014, while the illustrated, comparably graded one from the Washington, D.C., First Day of Issue sold for $1,406.25 at a recent GreatCollections auction.

It is tough to believe that five years have passed since the 1964–2014-W Kennedy half dollar was released at the American Numismatic Association World’s Fair of Money in Rosemont, Illinois, to a stampede of eager collectors and speculators. The first coin sold — later certified by Professional Coin Grading Service as Proof 70 Deep Cameo and labeled as the first Proof gold Kennedy half dollar sold by the U.S. Mint at the show — traded for $100,000 in a private transaction after the convention.

The .999 fine gold half dollar celebrated the 50th anniversary of the 1964 Kennedy half dollar’s release. Strict limits led some buyers to wait in line overnight at the ANA show for a chance to buy one at the issue price of $1,240. Those first buyers resold their gold half dollars for as much as $3,000 at the show, and on Aug. 24, 2014, one graded PCGS Proof 70 Deep Cameo, First Strike, sold for $2,950 in an eBay auction.

As it became clear that the authorized mintage of 100,000 wouldn’t be met with sufficient orders, the U.S. Mint reduced the authorized mintage to 75,000, but prices declined even further. It limped to a final sales figure of 73,772 as reported in the “Red Book.” A Nov. 23, 2014, GreatCollections auction saw a PCGS Proof 70 Deep Cameo example bring $1,101.10, less than the issue price.

A reader recently shared with Coin World, “And here we are, five years later: tried selling my PCGS First Strike Proof 69 Deep Cameo to a local coin dealer and he offered $1,000. Spot gold price is $1,509 an ounce today. Gold would have to go to $1,900 an ounce before collectors who shelled out $1,240 a coin would realize any profit.” He concluded by calling the Kennedy gold half dollar an “absolute disaster of an offering.”

The issue was a success for the U.S. Mint, despite the logistical challenges. However, collectors who eagerly bought into the hype and paid significant premiums for these First Strike issues, today have seen most premiums evaporate. Today, a typical example graded Proof 69 Deep Cameo sells for around $1,100 in online auctions. Special holders can bring a bit more, like a PCGS Proof 70 Deep Cameo sold on the first day of sale from the Mint’s Washington, D.C., store in a First Day of Issue holder that brought $1,406.25 at an October 20 online auction.

The issue serves as a cautionary tale, warning collectors to consider long-term value when purchasing modern U.S. Mint products for investment, and to beware of paying exorbitant premiums for special third-party certification holders. After all, with advanced modern minting processes employed across each of the mints, the first Proof coin struck is essentially indistinguishable from the rest in its inherent quality. 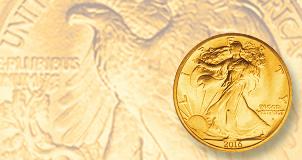