The difference a grade point makes 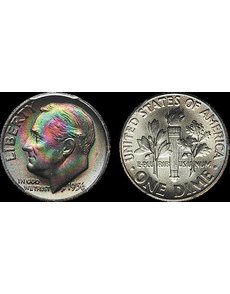 When it comes to “top-of-the-pop” condition rarities that are among the finest known of an issue, a single grading point can make a huge difference in price.

This was evident at a Dec. 5 Heritage auction where a 1956 Roosevelt dime graded by Professional Coin Grading Service as Mint State 68 Full Bands brought $9,987.50.

The nearly five-figure price makes it among the most expensive Mint State Roosevelt dimes ever to trade at auction.

It is the only 1956 dime graded as such by PCGS, although it attained its new lofty grade only recently.

The same dime was previously sold at a Feb. 8 Heritage auction for $2,585. At that sale it was graded MS-67+ Full Bands by PCGS and the coin is pictured at the PCGS Coin Facts website as a MS-67+ Full Bands.

Regardless of the numerical grade, it’s a uniquely beautiful coin, characterized by deep obverse toning in decadent shades of cobalt, emerald, violet and rich gold.

Heritage Auctions’ next-highest Mint State Roosevelt dime sold during the past five years is a 1947-S PCGS MS-68 Full Bands that brought $5,287.50 at the firm’s Nov. 1 auction in New York. That coin was noteworthy for its wild bright blue toning.

The demand of collectors participating in the grading service registry sets continues to put pressure on those top-graded coins, making rarities out of coins that are generally common in even MS-65 and MS-66 grades.

It’s a collecting area that does not show signs of slowing down. However, as more old groups of coins from the 1950s, 1960s and 1970s come to market, the possibility that the population of these modern-era condition rarities might move up is always a threat.

PCGS began applying the Full Bands designation to Roosevelt dimes in March 2003. For the designation, PCGS requires that both the upper and lower pair of bands on the torch be distinct and show full separation. The line dividing the bands must be complete and unbroken to qualify as full bands.