The case for tradition 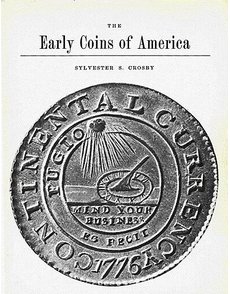 In the realm of Colonial coin collecting, “What does Crosby say?” — referring to numismatist Sylvester S. Crosby’s The Early Coins of America — is as present-tense and matter-of-fact a question as an inquiry into the weather.

The fraternity of Colonial coin collectors is as diverse as any slice of American numismatists.

If you go to a Colonial Coin Collectors Club convention, or a major auction of Colonial items, you’ll see blue-collar guys in baseball caps who are looked up to by millionaire executives, young people barely out of college holding court with men with canes, young professionals ready to get back to their kids and One Percenters whose chauffeurs are patiently waiting for them to take their leave.

It takes something special to unite people whose interests and demographics are seemingly so disparate. While the same could be said for coin collecting in general, there is something unique about the Colonial coin hobby that makes such notable differences and social distinctions completely disappear.

What Colonial coins have is a culture, a commonality of thought that comes from tradition. After all, what could be more traditional than the American coins that have been collected since before the founding of the U.S. Mint?

It is a culture where men of a bygone era like Sylvester S. Crosby, Sydney P. Noe and Edward Maris are spoken about as if they were in the next room. “What does Crosby say?” is as present-tense and matter-of-fact a question as an inquiry into the weather.

It is a culture that recognizes that the best research may have been published in 1875 or last week, that values facts derived from coins and historical sources the most, but in absence of new facts, values tradition most of all.

Any new knowledge in the Colonial field that doesn’t build upon that body of knowledge and the whole of Colonial American history is viewed suspiciously.

Newcomers to the field pick up on the language and traditions of Colonial coins quickly.

Auction catalogs of major collections are the most direct entry point to that cultural base: every unfamiliar term, every pedigree, every reference is a strand in a woven tradition that a newcomer must unravel.

Following exposure from afar, all that remains to join the fraternity is to meet the collectors who preserve these traditions.