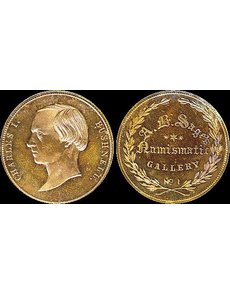 Ira S. Bushnell, a New York City attorney, was a leading numismatic scholar in the 1850s. Many of his findings were published years later in 1875 by S.S. Crosby in Early Coins of America. Bushnell’s pioneering An Arrangement of Tradesmen’s Cards, Political Tokens, also Election Medals, Medalets, &c. Current in the United States of America for the Last Sixty Years, 1858, set the stage for the widespread collecting of these series.

Augustus B. Sage, a New York schoolteacher with a sharp mind and a love for coins, contributed a series of articles in 1857 to the New-York Dispatch. An anonymous reader, “Numismatist,” took exception to certain of Sage’s comments. Not long afterward Bushnell, who used that pseudonym, became acquainted with Sage and they became friends.

In 1859, Sage, by then the founder of the American Numismatic Society and a leading rare coin dealer, commissioned George H. Lovett to create the Numismatic Gallery series of medals. The first honoree was Bushnell.

Bushnell died Sept. 17, 1880. His magnificent collection was purchased by Lorin G. Parmelee, a Boston numismatist who had a private cabinet second only to that of T. Harrison Garrett in Baltimore. Parmelee extracted pieces of interest and then sold the Bushnell coins to the Chapman brothers — S. Hudson and Henry — who created an auction catalog unlike anything ever seen. More than 140 pages in length and printed on impressively large folio sheets, it described 3,000 lots. Copies with photographic plates were available for the unheard of price of $5 (nearly a week’s wages for a factory worker at the time). Descriptions included extensive historical information.

The auction created a sensation and was highly admired — except by certain other coin dealers, some of whom spent a lot of effort publishing what they could find in typographical and other errors.

None other than the estimable W. Elliot Woodward could not resist noting, for example, that the Chapmans had relocated Harvard from Cambridge to New Haven (Lot 328), had moved the Charitable Mechanic Association from Massachusetts to New Jersey (Lot 2117) and had George Washington posing as a seated kangaroo on a medal (Lot 1230). Similarly, Woodward’s sale of Oct. 16 to 18, 1882, began with a long diatribe against the Chapman brothers, their puffery and misuse of terms, among other transgressions. More anti-Chapman comments appeared in his sale of Jan. 8 to 10, 1884, among other places.

The Chapmans went on to lead the field of auctions, inheriting the mantle from Woodward who was in the twilight of his remarkable career.