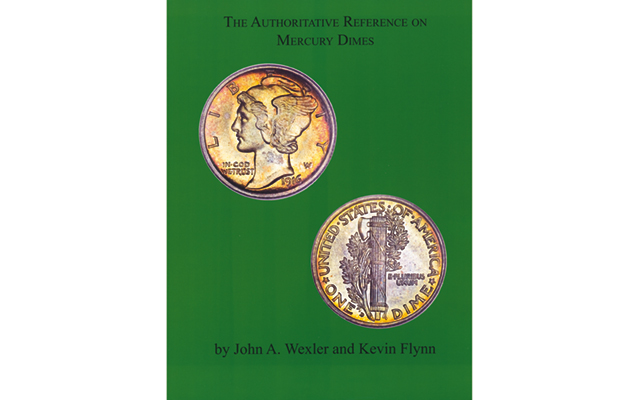 An updated edition of The Authoritative Reference on Mercury Dimes by Kevin Flynn and John Wexler has recently been published.

An updated edition of The Authoritative Reference on Mercury Dimes by Kevin Flynn and John Wexler has recently been published. It provides substantial updates from the first edition, which was published in 1999 under the title Treasure Hunting Mercury Dimes.

The Winged Liberty Head dime, commonly known as the “Mercury” dime, was struck from 1916 through 1945 at the Philadelphia, Denver and San Francisco Mints. The authors write in an accompanying press release, “The primary purpose of this book was to create a complete and comprehensive reference for the Mercury dime series including all die varieties, history, patterns and authentication of rare dates, date-by-date analysis, and historical documents.”

The new book contains 64 doubled die and 105 repunched Mint mark varieties. The authors note that while only a few new doubled dies were added, the number of RPMs easily doubled.

The history section has also been expanded.

A key highlight of the book is the authentication section, which includes detailed diagnostics on the key issues in the Winged Liberty Head dime series, most notably the low-mintage 1916-D issue.

Three appendixes record contemporary letters and documents involving the coin. Cited is an article in the December 1916, issue of the American Numismatic Association publication The Numismatist, where an unnamed writer states on the design: “The opinion of a single man, whether he be artist, sculptor, numismatist, or layman, as to its merits or the beauty of the design should not weigh heavily, but when a number of men familiar with the coinage of the world from the earliest times all pronounce it a very creditable piece of work and perhaps the most attractive coin this Government has ever put in circulation, its popularity with collectors cannot be a matter of doubt.”

The retail price for the softcover book is $39.95 and orders can be made by sending check or money order to Kyle Vick at Stanton Books and Stone Mountain Supply, 1575 Old Alabama Road, Suite 115, Roswell, GA 30076, or by visiting www.stantonbooks.com.