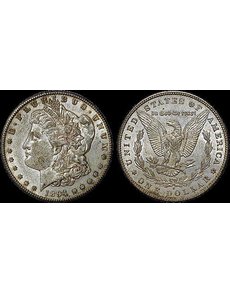 This About Uncirculated 58 1894-S Morgan dollar with a green CAC sticker brought $528.75 at the second Eric P. Newman auction on Nov. 16. Several weeks later on eBay it sold for $635, providing the buyer a quick, modest profit.

Why do auctions like Heritage’s second sale of Eric P. Newman’s collection matter?

Auctions like Newman II can be dissected into three stages.

First, in the initial stage, dealers and collectors view the coins and expectations are set. News coverage is generally contained within the coin collecting realm.

The second stage is the actual auction, where the coins are sold and, as in the case of the Newman auction, expectations are generally exceeded.

Typically, the primary mainstream news coverage happens after the sale when high prices realized can provide a useful angle for reporters. For Newman II, the mainstream story was that a collection assembled more than 50 years ago for $7,500 brought $23 million. It’s a short, easy message.

The hope is that stories like this attract people to coins as a collectible investment and that people will start learning about coins and wanting to buy them.

In the third stage, the coins enter private collections or dealer inventories. Either way, eventually they enter the marketplace; some may just take longer to get there.

The market velocity (the speed at which these coins return to market) has been slow for Newman’s coins.

Only a handful have shown up on eBay and few are seen in dealer price lists. That means that most were likely purchased by collectors, which puts pressure on the prices for the few really great Newman coins available now on the secondary market.

The Newman Collection has another interesting angle: accessibility. With more than 400 lots selling for less than $500, including some at less than $100, this was an auction that nearly all collectors could participate in.

A typical collector coin from Newman II, an 1894-S Morgan dollar graded About Uncirculated 58 with a green Certified Acceptance Corp. sticker, once in the Col. E.H.R. Green Collection, sold in a Dec. 2 eBay auction for $635. At the Newman auction Nov. 16, it brought $528.75, which was consistent with comparable non-Newman examples. ¦