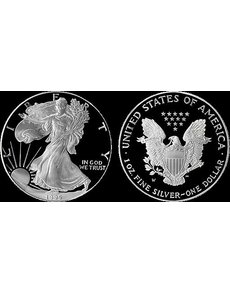 In total, 104 bids were placed in the online auction and three separate bidders battled above the $50,000 level. Also interesting: The winning buyer (bidder 21) placed his or her bid on March 29, several days before the auction closed. One wonders how high that bidder was willing to go to win the prize.

The 1995-W American Eagle silver dollar is a curious issue in that its survival rate in this perfect grade is extremely low. Examples are marred by frequent spots and often show evidence of handling as a result of improper removal from their original U.S. Mint packaging as part of a five-coin 10th anniversary American Eagle set.

It’s not a unique coin, but it is infrequently traded, and as the brief lot description noted, it has been several years since a perfect example of this key issue has appeared at auction.

It is another example of how the “quest for the best” can make these condition rarities increasingly expensive.

A primary component of the demand for the GreatCollections coin likely stemmed in part from collectors battling for the top spot among PCGS Registry Sets.

Of the 455 sets in the “Silver Eagles, Proof (1986-present)” category, a dozen sets are tied for the top set with an average grade of Proof 69.88. The stopper for each set, based on the displayed information: a Proof 70 DCAM 1995-W. With this coin, one deep-pocketed collector could get bragging rights to the numerically finest Proof silver American Eagle set. ¦