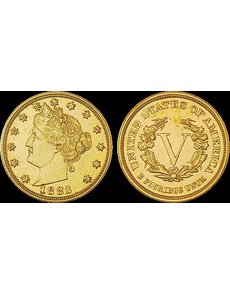 This is likely a recent recreation of a “racketeer nickel”: a gold-plated 1883 Liberty Head 5-cent piece. It does not have a reeded edge. Those who created the original “racketeer nickels” probably passed them as gold $5 coins.

I recently came across this gold-plated Liberty Head 5-cent piece in my collection and I’m wondering if this is a real coin?

First a little history about this coin. The Liberty Head 5-cent series was produced for circulation from 1883 to 1912.

For the first few months of production in 1883, the reverse depicted only the Roman numeral V on the reverse to represent the coin’s denomination of 5 cents. This was the only 5-cent piece issued from 1829 to date — of both silver half dimes and copper-nickel 5-cent coins — that doesn’t spell out or use Arabic numerals for the denomination. That creative decision soon became a source of trouble.

The 1883 Liberty Head 5-cent piece that employed only a Roman numeral V to represent the denomination created opportunities for those who sought to take advantage of the public’s unfamiliarity with the new design. (It replaced the Shield 5-cent coin, which bore the legend 5 CENTS.)

The profile Charles Barber used on the Liberty Head 5-cent piece somewhat resembles the Liberty profile on the contemporary Coronet gold $5 half eagle, and in absence of the familiar 5 CENTS inscription, opportunistic con artists found a way to pass these coins as $5 half eagles.

They gold-plated 1883 Liberty Head 5-cent coins, even engraving reeding on the edges of some (the copper-nickel 5-cent pieces have a plain edge). These unscrupulous individuals then passed the modified 5-cent coins as gold $5 half eagle coins to merchants and other consumers. The altered pieces quickly became known as “racketeer nickels.”

In response to the problem, Barber modified his design, adding the word CENTS to the bottom of the coin’s reverse. After more than 5.4 million 1883 Liberty Head, No CENTS 5-cent coins were produced, later in 1883 more than 16 million of the With CENTS pieces were struck. These later issues, however, were not saved to the same extent as the No CENTS issues, so the values for the second subtype are higher than the first subtype.

Most racketeer nickels sold today are likely alterations. It is not possible to say with 100 percent certainty if you have an original racketeer nickel or a more recently produced version of one.

Some little details hint at what your coin might be, though. The edges of the coin you have are not reeded, and the gold coating appears solid overall.

Originals sometimes show wear in the gold coating, possibly indicating that they circulated.