The 11th coin is special 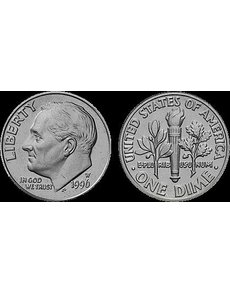 The 1996-W Roosevelt dime was added to the 1996 Uncirculated Mint set as the 11th coin, a collector bonus to mark the 50th anniversary of the introduction of the Roosevelt dime.

The San Francisco Mint is striking circulation-quality 2012 America the Beautiful quarter dollars with S Mint marks. They won’t be released into circulation, but sold to collectors in bags and rolls at a numismatic premium.

This is certainly not the first time that the U.S. Mint has struck noncirculating versions of circulating coins at a branch Mint solely to appeal to collectors.

A single example was included in each 1996 Uncirculated Mint set. While Mint sets traditionally included an example of each coin struck for circulation, here a quasi-commemorative issue was included.

An ulterior motive for including this coin was simply to boost sales of Mint sets to collectors — and it succeeded, increasing sales almost 50 percent. Nearly 1.5 million 1996 Uncirculated Mint sets were sold, compared to only 1 million sets in preceding years.

The 1996-W Roosevelt dime is in many ways anomalous. To start with, it is the only version of a circulation-quality coin ever struck with a W Mint mark.

It’s also one of only two copper-nickel clad coins that have a W Mint mark. Trivia buffs take note: The only other is the 1993-W James Madison, Bill of Rights commemorative half dollar.

While the 1996-W Roosevelt dime is a low-mintage standout, it’s also very available to collectors. All pieces remain in choice to gem Uncirculated condition or better and the number of coins surviving from the original issue is essentially 100 percent.

In fact, the 1996 Uncirculated Mint set that includes this coin was originally sold for $8 and can still be bought for around $17.

Other similar issues of Uncirculated Mint sets issued in prior and following years still trade for their issue price of $8 — putting the basal value of this 1996-W coin at less than $10.

In the highest grades, however, it’s a different story. Somewhat elusive examples grading Mint State 68 FT command more than $100. FT denotes “Full Torch,” meaning that the bands holding the torch together on the coin’s reverse are fully defined, an attribute that merits a premium in the marketplace.