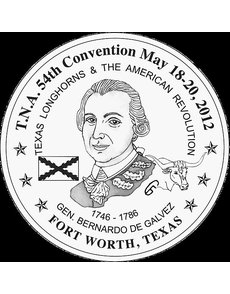 The Texas Numismatic Association will issue its 2012 convention medal on May 18, the opening day of the TNA’s 54th annual convention and coin show, held in Fort Worth.

The obverse of the 2012 TNA medal features Spanish Gen. Bernardo de Galvez, the Spanish Cross of Burgundy flag and a Texas longhorn. The reverse of the medal shows the official seal of the TNA.

The medal was designed by TNA Medals Officer Frank Galindo of San Antonio.

The TNA selected Gen. Galvez for the medal in recognition of his role as one of the most influential leaders aiding the American colonists in their struggle for independence in 1776, notes a TNA press release. Although Galvez’s role is left out of many history books, according to the TNA, a few historians are beginning to acknowledge his contributions to the American Revolution. The support that he gave to George Washington and the American Colonists helped to establish the United States of America, according to a TNA press release.

The city of Galveston was named in honor of Galvez. He was honored with a bust at the site of Fort George in Florida and a U.S. postage stamp was issued in 1980 to commemorate the 200th anniversary of Galvez’s victory at Mobile, Ala. A statue of Galvez mounted on a horse stands in Washington, D.C. A speech given on June 3, 1976, by King Carlos I of Spain is engraved on the base of the statue, and reads in part, “May the statue of Bernardo de Galvez serve as a reminder that Spain offered the blood of her soldiers for the cause of American Independence.”

Orders may be placed for a silver and bronze medal set or single bronze medals, by contacting Galindo via email at karfra1@netzero.net or by mail at P.O. Box 12217, San Antonio, TX 78212-0217.

Single bronze medals are priced at $5.50 postpaid. Medal sets (one bronze and one silver) are priced at $50 each set plus $4 per set for postage and handling. If insurance is requested for the medal set, an additional cost of $2 per set is charged. Make checks or money orders payable to TNA. The medals will be mailed after the TNA convention.