TNA will issue its 2015 convention medal May 29 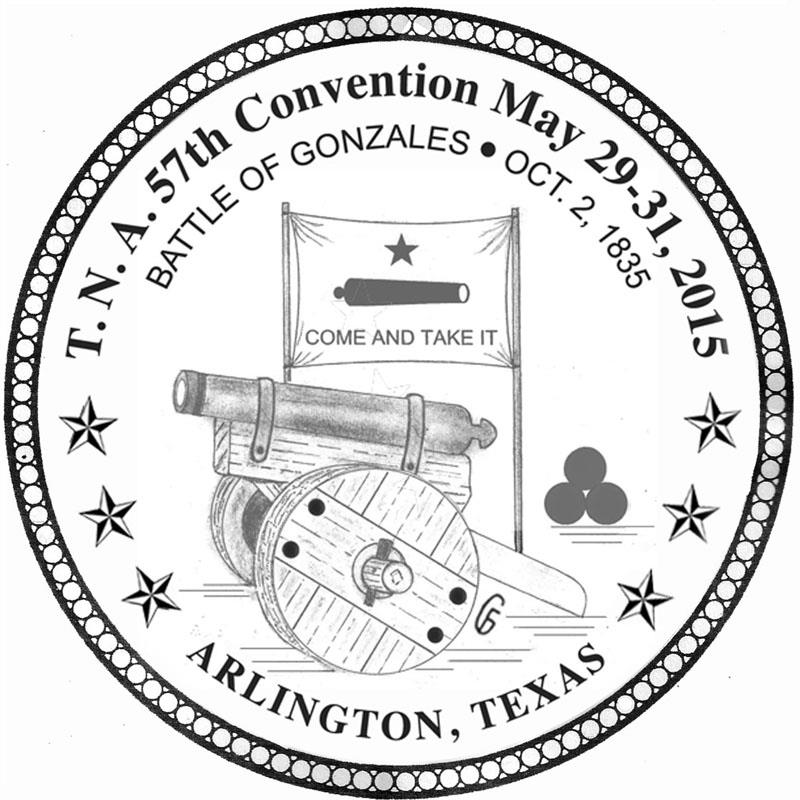 The Texas Numismatic Association is offering this medal for its May 2015 convention.

The following news release from the Texas Numismatic Association reveals and explains the theme of the group's 2015 medal, to be released at the convention May 29:

In 1835, a brief battle occurred in Gonzales, Texas, and although it was not a major encounter and described as merely a skirmish, it helped pave the way to Texas independence. There have been many memorable battles in Texas, such as the valiant Battles of the Alamo, San Jacinto, Goliad and many others. But one brief battle over a small cannon is considered the first battle of the Texas Revolution and was fought in Gonzales on October 2, 1835.

Four years earlier, in 1831, the colonists in Gonzales requested a cannon from Mexican authorities for protection against repeated Indian raids. The request was granted and a six-pound caliber cannon was given to the colonists. During this period, the political situation in Mexico began to deteriorate and resulted in widespread unrest. In 1835, Col. Domingo Ugartechea served as military commandant of Coahuila and Texas. He commanded the Centralist Army at Presidio San Antonio de Béxar.

Then in late September, 1835, Ugartechea ordered Lt. Francisco de Castañeda and one-hundred dragoons to request the return of the cannon.  He instructed Lt. Castañeda to avoid actions that would lead to conflict. When Castañeda and his soldiers reached the Guadalupe River opposite Gonzales, they found the crossing blocked by high water and eighteen armed men from Gonzales. Castañeda had a dispatch for the alcalde, Andrew Ponton, but the colonists said that he was out of town, so Castañeda ordered his troops to set up camp near the crossing.

In the interim, the colonists sent couriers requesting assistance from surrounding settlements. Soon the volunteer colonists numbered one-hundred and forty, with more expected to arrive. The colonists elected John Henry Moore as their commander and awarded him the rank of Colonel.  Joseph W. E. Wallace was also elected, as Lt. Colonel. Upon learning that volunteers were arriving in Gonzales and that his dragoons were now outnumbered, Lt. Castañeda moved his troops further up the river. Col. Moore planned an early assault fearing that Castañeda might receive reinforcements.

The Texans crossed the river and engaged the Centralists with a surprise attack on the morning of October 2, 1835.   Col. Moore’s men flew a white flag made by Cynthia Burns and Evaline DeWitt that read “Come and Take it.” It was a cotton cloth without a border and depicted a single five point Lone Star above a cannon. Under the cannon were the words “COME AND TAKE IT,” referring to the cannon.

Col. Moore’s men opened fire and the little cannon roared. This incident marked a break between the Gonzales colonists and the Centralist Government. This skirmish is considered to have been the start of the Texas Revolution. Castañeda arranged for a cease-fire and asked Moore why they were attacked. Moore replied that they were fighting for the cannon and the Mexican constitution of 1824, which had guaranteed rights for Texas but had since been replaced by Santa Anna’s Centralist Government.

Castañeda stated that he was in complete agreement with the Texans’ politics but that he was given an order which he was obligated to fulfill.  Moore suggested that he defect, but Castañeda replied that while he abhorred Santa Anna’s policies, he was obliged by honor to comply with his duty as an officer and politely refused the offer. Unable to negotiate a settlement, the cease fire order ended and the fighting continued.

The Texan rebels outnumbered the Centralist forces, so Castañeda decided to withdraw his troops and return to San Antonio.  In doing so, he complied with the orders from Col. Ugartechea not to provoke a major conflict in attempting to recover the little cannon. The brief skirmish resulted in the death of one Mexican soldier. The only injury reported by the colonists was a broken nose suffered when a man fell off a horse.

The Battle of Gonzales is considered the first actual battle of the Texas Revolution. It was the spark that  ignited the thrust for the Texas rebellion. Over the years, this conflict has become known as the “Lexington of Texas.” The little cannon was not surrendered to the Centralist forces, and has now earned a place in the rich history of Texas as a symbol of Texas Freedom.

John Henry Moore was an army officer, a Mason, an Indian fighter, a farmer and a cattle rancher.  He died on December 2, 1880, and was buried in the family cemetery north of La Grange.

Joseph W.E. Wallace served as a Union General, a Mason, a lawyer, and a District Attorney. He died at Columbus on August 24, 1877. His body was reinterred in the State Cemetery in 1955.

Texas patriots Moore and Wallace, as well as the little cannon that roared and the volunteers at Gonzales, made a significant impact on the vibrant history of Texas.

The fate of the little cannon is unclear. Some think the cannon was buried and later recovered. Historian Thomas Ricks Lindley thinks the cannon was taken to San Antonio, where it would have been used in the Battle of the Alamo.

Today, the battle is re-enacted every October during the annual “Come and Take It Days” celebration in Gonzales. It is important that this little cannon be remembered for firing the first shot for Texas Independence. This year marks the 180th anniversary of this historic event.

The obverse of the 2015 TNA medal features the six-pound caliber cannon that fired the first shot for Texas Independence, as well as the “COME AND TAKE IT” battle flag.

The reverse of the medal shows the official seal of the Texas Numismatic Association. The medal was designed by TNA Medals Officer Frank Galindo of San Antonio, Texas.

Single bronze medals are priced at $6.50 postpaid. Medal sets (one bronze medal and one 1-ounce silver medal) are priced at $47.00 for each set, plus $4.50 per set for postage and handling. If insurance is requested, there is an additional cost of $2.50 per medal set.