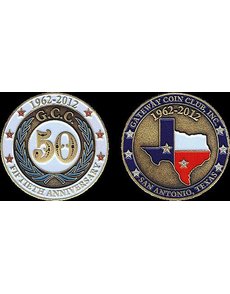 For $10 postpaid, collectors may obtain examples of the enameled bronze medals the Gateway Coin Club in San Antonio, Texas, had struck to commemorate the club’s 50th anniversary in 2012.

The Gateway Coin Club in San Antonio, Texas, celebrated its 50th anniversary in 2012 with the issuance of an enameled, 1.5-inch diameter bronze medal.

Frank Galindo, the club’s current president and also medals officer for the Texas Numismatic Association, can be contacted by email at karfra1@netzero.net.

The remaining 30 are now being offered for sale to anyone who wants one.

A special 50th anniversary banquet was held on Sept. 20 to celebrate the milestone. Examples of the medals were presented to club members who attended the banquet. ¦