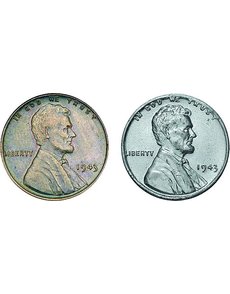 I friend of mine has found a 1943 cent that appears to be made of copper. To whom should he submit the coin for evaluation, and what value would you assign it if it proves to be a counterfeit?

Finding a genuine 1943 Lincoln cent struck in the 95 percent copper, 5 percent zinc alloy is an extremely rare occurrence. It is estimated that only 21 known examples exist, in comparison to the 1.09 billion zinc-coated steel 1943 cents struck collectively by the Denver, Philadelphia and San Francisco Mints.

Though the possibility exists that the piece in question could be genuine, it is exceedingly much more likely that the coin is a 1943 Lincoln zinc-coated steel cent, plated with copper to make it appear bronze, or a 1948 cent on which the 8 in the date was carved to resemble a 3. It could even be a die-struck counterfeit piece.

Before going to the trouble of spending time and money having this piece authenticated by a specialist or third-party grading service, there are simple, nondamaging tests one can perform.

Magnetism: The coin should be nonmagnetic. If the coin sticks to a magnet, it is not bronze. Zinc-coated steel cents are magnetic.

Date: The date on a genuine piece should have the same long-tailed 3 as seen on 1943 zinc-coated steel cents. The 3 used on the 1943 cent is distinctive and does not match the 3 used on other cents, for example that used on the 1933 and 1953 cents.

Strike: The coin should have an exceptionally sharp strike. Pay close attention to the v.d.b. designer’s initials on the truncation of Lincoln’s bust on the obverse, with borders built up almost as on Matte Proof coins. (The distance between the faces of the dies was set to the lesser thickness of steel blanks, so that they compressed the thicker bronze blanks much more.)

There is no easy way to assign a value to a copper-plated piece, an altered date coin or a die-struck counterfeit cent. Regardless of an agreed upon price, any potential buyer should be made clearly aware of the true origin of the piece before any purchase.