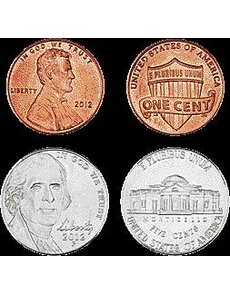 One industry consultant argues that eliminating the cent would not result in any cost savings, that even if the U.S. Mint received for free the metal used in making the cent and 5-cent coin, the remaining costs assigned to the two denominations would still be above their face value.

Switching to a steel-layered composition for all circulating U.S. coin denominations would save millions of dollars annually in production costs, a consultant testified April 17 before a House Banking Subcommittee hearing on “The Future of Money: Coin Production.”

Among his comments, Bosco advocated the adoption of a program to recover selected circulating coinage in their current compositions for metal reclamation.

The House Banking subcommittee is chaired by Rep. Ron Paul, R-Texas, who took the opportunity during the hearing to launch another salvo toward Congress in recommending the abolishment of the Federal Reserve System.

Jarden, which is a licensee of the Royal Canadian Mint’s multi-ply plated steel technology, currently is the lone supplier to the U.S. Mint production facilities at Denver and Philadelphia with ready-to-strike planchets with upset rims.

Jarden is located in Greeneville, Tenn.

Richard A. Peterson, deputy director of the U.S. Mint, contributed written comments for the record.

In his April 17 testimony, Bosco testified that coin recovery and salvage could yield approximately $2 billion in revenue for the Mint. In addition, Bosco outlined two other primary findings from research to the potential benefits of using multi-ply plated steel for its vended coins.

The findings are pursuant to the Coin Modernization, Oversight and Continuity Act of 2010, Public Law 111-302.

? Employing steel as the dominant component of a new alloy for the Roosevelt dime, Jefferson 5-cent coin and the America the Beautiful quarter dollars would reduce the costs of raw materials for the three denominations by 84 to 89 percent, Bosco said.

More than half of costs of production are tied up in metal acquisition, Bosco said.

The copper-nickel clad dime and quarter dollar are currently produced from outer layers of 75 percent copper and 25 percent nickel bonded to a core of pure copper.

The 5-cent denomination is composed of a homogenous mix of 75 percent copper and 25 percent nickel.

Overall raw materials costs for all denominations could be reduced by 80 percent by substituting the steel-layered technology, Bosco testified.

Changing the composition of circulating U.S. coins could save the Mint up to $200 million annually, Bosco said.

? Eliminating the cent would not result in any savings.

Even if the metals for those two denominations were provided gratis, Bosco said that because of other allocated fixed costs, it would still cost 1.41 cents to produce each cent and 6.8 cents for each 5-cent coin.

These allocated fixed costs, including costs of operating the die shops and other costs of administration, would have to be redistributed among the remaining denominations should the cent be eliminated, Bosco said.

Canada has maintained an active program the past six years to remove the older nickel and nickel alloy coins from circulation, defacing them and selling the recovered metal for scrap, as the multi-ply coins remain in circulation, Weber said.

Since being introduced, multi-ply technology has been adopted internationally by 28 different countries, covering more than 60 denominations, according to Weber.

Savings for the composition switch alone for just the Jefferson 5-cent coin would save U.S. taxpayers $80 million annually, Weber said.

Blake said the key to the success of Canada’s recent changes to the $1 and $2 coins was keeping industry, along with others that would be affected by the compositional change, involved throughout the development process.

Also key: Canada did not change the size or thickness of the coins.

Blake said coin metallurgical content changes will affect not only how well sorting, counting and authenticating equipment functions, but also affect the life of the coin.

In addition, “Coins manufactured from more common metals are easier to counterfeit than those containing less common metals or a unique combination of metals,” Blake said. “In order to provide a high level of security, the metallurgical content of any new coin must be unique to every other coin in the world.

“The penny, like the larger denomination coins, should be nearly free from the threat of counterfeiting.”

The U.S. Mint is currently in the second year of a two-year study seeking alloy alternatives. The study, authorized by 2010 legislation, was prompted by the production costs of the Lincoln copper-plated zinc cent and Jefferson copper-nickel 5-cent coin rising to double their face value.

The study is addressing the composition of all circulating denominations, with the complete findings and recommendations to be provided to Congress by Dec. 14, 2012.

Peterson’s written comments included the recurring recommendation to Congress to introduce and pass legislation granting the secretary of the Treasury discretionary authority to change the specifications for all U.S. coins — authority which statutorily has been vested solely with Congress.

Currently, the Treasury secretary only has the authority to change the composition of dollar coins and the ratio of copper and zinc in the cent. A manganese-brass clad composition is used for Presidential dollars and Native American dollars, both of which are currently being struck in circulation quality for numismatic sales only.

Peterson’s comments note that President Obama’s Fiscal Year 2013 budget includes a legislative proposal, which Treasury and U.S. Mint officials support, that would grant the Treasury secretary the authority to specify the coinage materials for the cent, 5-cent coin, dime, quarter dollar, half dollar and dollar.

Rep. Paul, a longtime opponent of the Federal Reserve, used the hearing to address a subject that has also been part of his presidential campaign platform. Paul has been seeking nomination as the Republican candidate for president in the current election cycle.

Paul remarked that changing the composition of circulating coinage “fails to address the root cause behind currency debasement.”

“The problem with the penny and the nickel is not that the price of copper and nickel are rising, but that the purchasing power of the dollar is declining due to the Fed’s currency debasement,” Paul said. “The same pattern has been seen throughout history, as debased currency results in the value of the metal content of coins outstripping their face value.

“Coins disappear from circulation and only paper money circulates. Finally, the currency collapses.

“Coins will begin to reappear once the monetary unit is restabilized, usually with the introduction of an entirely new currency and after much economic hardship for the people.”

Paul concluded that “focusing on the symptoms rather than the causes is only hacking at the branches, when we need to strike at the root.”

The complete testimony from the hearing participants, as well as links to the archived webcast, can be found online at http://financialservices.house.gov/Calendar/EventSingle.aspx?EventID=289484. ¦