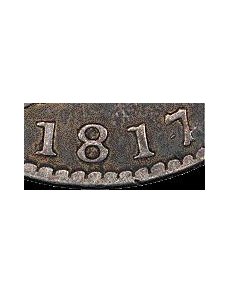 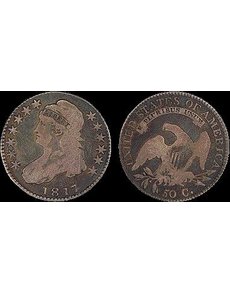 The newly reported 10th example of the 1817/4 Capped Bust half dollar overdate has been authenticated and graded Very Good 8 by PCGS.

The population of known 1817/4 Capped Bust half dollars has increased by one, with the 10th reported example quietly entering the Professional Coin Grading Service Set Registry.

Graded Very Good 8 by PCGS, the new find, Overton 102a (Early Half Dollar Varieties: 1794-1836 by Al C. Overton and Donald Parsley), was first publicly revealed in the PCGS Population Report during the first week of May, according to a PCGS official.

The Louisiana collector who is the current owner of the newly discovered PCGS VG-8 half dollar now has it listed in the PCGS Set Registry (online at www.pcgs.com/setregistry/) in sets identified under the collection moniker “early halves.”

The current owner acquired the coin for an undisclosed six-figure price.

In a July 11 telephone interview with Coin World, the Louisiana collector, who wishes to remain anonymous, said he was contacted June 30 by a local coin dealer with whom he has done business in the past.

The collector’s dealer in Louisiana, acting as an intermediary for the dealer who owned the coin, informed the collector about the availability of a PCGS VG-8 1817/4 Capped Bust half dollar and asked whether he was interested in purchasing the piece.

A collector of Bust half dollars for more than 25 years and a longtime member of the Bust Half Nut Club, the collector said he initially had doubts about the offering; at the time, he had not been told the coin was a new piece. However, he was familiar with the provenance of the nine already known 1817/4 half dollars and knew that none of those coins was certified VG-8 by PCGS or any other grading service.

The Louisiana collector asked his dealer to have images of the coin in the holder sent to him. In the meantime, the collector said he checked the PCGS Population Report online and saw a VG-8 example of the overdate listed. He further checked PCGS Coin Facts online, which had images of the coin posted.

The Louisiana collector said that he was told the new discovery came from a numismatic estate whose owner had collected coins from the 1930s through the 1960s. The heirs ended up selling the 1817/4 Capped Bust half dollar to a dealer who had the coin certified and encapsulated by PCGS.

The Louisiana collector said he knows nothing about the heirs, the estate or from what state the coin originated.

The first dealer to own the coin purchased it from the heirs for an undisclosed sum and offered the coin first to one of his customers, who countered with a lower buy price. The dealer rejected the first collector’s counteroffer.

The overdate half dollar was then offered to a second person, a dealer, who did not purchase the coin but instead contacted the dealer in Louisiana. The Louisiana dealer subsequently contacted the eventual buyer as to his interest in purchasing the rarity.

The collector had less than a day to make up his mind on whether to purchase the coin.

“I had to decide what I needed to do to pay for the coin,” the Louisiana collector said. “It has nice original surfaces. I always dreamed of owning one, but at the same time, [purchasing the coin was] a pretty frightening concept. It’s a pretty significant and expensive coin.”

The Louisiana collector purchased the coin, which is the most expensive coin in his collection, as well as the lowest graded.

While the Louisiana collector was deciding whether to purchase, the first collector apparently had second thoughts about the original price and indicated that he was willing to purchase the half dollar, but his change of heart occurred too late.

All of the 1817/4 Capped Bust half dollars bear the same basic die diagnostics, except where details may have been worn through circulation.

According to the Overton/Parsley reference, the obverse of the 1817/4 half dollar exhibits sharp stars.

On the reverse, the I in UNITED and the I in AMERICA both have their lower right serifs missing, causing them to resemble the capital letter J.

Dealer Sheridan Downey (www.sheridanscoins.com), an expert in early U.S. half dollars who maintains a pedigree list of the known examples, explains that Assistant Mint Engraver John Reich’s first two working dies prepared for 1817 were overdates, with the 1817/3 coins struck first, followed by the 1817/4 half dollars.

Reich resigned from the Mint in March 1817.

The new discovery, the 10th reported, is the first example of the rare 1817/4 Capped Bust half dollar reported since a Colorado woman reported the ninth known piece in December 2007.

The woman received the ninth known example of the 1817/4 half dollar 10 years earlier from her father’s dispersal of his coin collection to her and her three siblings. She told Coin World in 2007 that she did not know how the rare overdate had come to be in her father’s possession.

The woman had been referred to ICG, then in Englewood, Colo., by officials at the American Numismatic Association in Colorado Springs, Colo., where the woman sought advice after receiving an offer of only $28 from a local coin dealer.

The coin, subsequently encapsulated in a PCGS holder and graded Good 6, is in the PCGS Set Registry as part of the “Merrill Collection.”

During the summer of 2005, contractor George Williams of upstate New York and his coin collector son Cullinan, then 14 years old, found the eighth known example of the 1817/4 half dollar in a pile of fill dirt.

Williams, a contractor, was working on a project when they found the coin while raking through the dirt.

ANACS authenticated the coin after examining it closely and consulting with specialists.

After holding onto the coin briefly, Williams decided to consign the half dollar to Heritage for auction. The coin was sold on Jan. 5, 2006, for $253,000, including the auction firm’s 15 percent buyer’s fee.

The finest known specimen, graded About Uncirculated 50 by PCGS, is the discovery piece identified in published pedigrees as the E.T. Wallis/Louis Eliasberg Sr. specimen.

The half dollar was owned by Wallis, owner of the California Stamp Co., who reported the coin had been in a family’s collection since 1846.

Wallis reported the coin in the October 1930 issue of the American Numismatic Association journal, The Numismatist. He then offered the coin for sale four years later, in 1934, in one of his fixed-price lists, for $2,500. Depending on the pedigree listing, Overton is reported to have “rediscovered” the piece when he purchased the Pratt Collection in either 1951 or 1952.

Overton sold the coin for $1,500 in 1953 to Eliasberg, a Baltimore businessman and prominent coin collector. When the coin was sold as part of the Eliasberg Collection in April 1997 by Auctions by Bowers and Merena, the coin brought $208,000.

Ownership changed hands several times between 1997, either through auction or private transactions, before being sold in David Lawrence Rare Coins’ November 2004 auction for $333,500.

The AU-50 coin is in the PCGS Set Registry as part of “The Charles Link Complete Variety Set.” ¦