Tennis champion Althea Gibson could be honored with gold medal 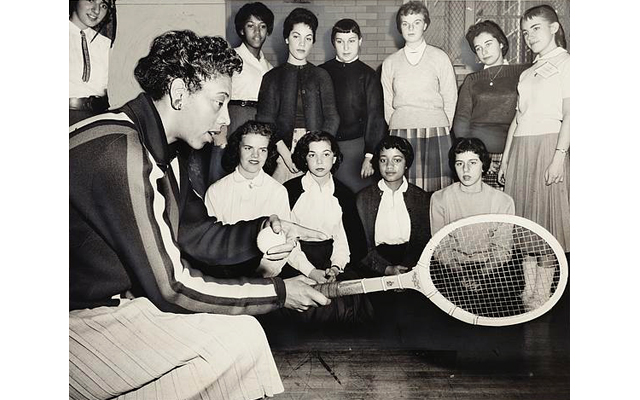 Althea Gibson, U.S. and Wimbledon tennis champion, gives some pointers on the game to a group of students in 1957.

Legislation to authorize the production and presentation of a congressional gold medal to honor a renowned tennis and golf great, the late Althea Gibson, was introduced in the House of Representatives June 25.

H.R. 4972 is sponsored by Rep. Donald M. Payne Jr., D-N.J., who sought the recognition for Gibson because of her “ground-breaking achievements in athletics and her commitment to ending racial discrimination and prejudice in the world of athletics,” according to a news release from Payne’s office.

“I am proud to honor the trailblazing career of Althea Gibson, who was one of the greatest tennis players of all time and a renowned golfer,” Payne said.

Gibson, a longtime resident of East Orange, N.J., mentored youth in the community as well as being an athlete, author, and a community role model. She died Sept. 28, 2003, in East Orange.

The legislation notes that Gibson was born in 1927 in South Carolina. During the 1930s and 1940s she lived with her family in Harlem and was introduced to tennis at the Harlem River Tennis Courts.

Racism and segregation repeatedly prevented her from participating in tournaments sponsored by the U.S. Lawn Tennis Association, according to the legislation.

However, in 1950, four-time U.S. Open champion Alice Marble wrote an editor in the American Lawn Tennis magazine “condemning the sport of tennis for excluding players of Althea Gibson’s caliber.”

Following that, Gibson became the first African-American to win the French Open, the U.S. Open, the Australian Doubles, and Wimbledon, all in the 1950s.

She was named the Female Athlete of the Year by the Associated Press in 1957 and 1958.

She became a pro golfer in 1959 and was the first African-American member of the Ladies Professional Golf Association.

If the legislation is approved by Congress and signed into law by the president, bronze duplicate medals would also be authorized to be struck and sold to the public by the United States Mint.