Ten years after the 'show' 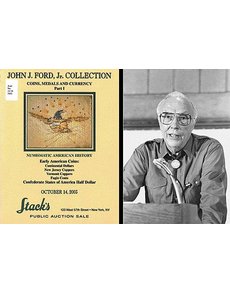 Since numismatic items from the collection of numismatist John J. Ford Jr. first began crossing the auction block Oct. 14, 2003, there have been two dozen sales, bringing total prices realized to more than $61 million.

It’s now been a full decade since the first episode of a show that kept the rapt attention of its viewers, none of whom knew what plot twists would follow, nor how long the series would run.

Fewer than 60 people gathered for the very first John J. Ford Jr. Collection auction, held on Oct. 14, 2003, at Le Parker Meridien Hotel on 57th Street in New York City. The sale was conducted by Stack’s, who in 1938 became the first firm to employ young Mr. Ford, long before he developed a reputation as one of the most well-read, clever and exacting numismatists of his generation.

Through the most recent Ford sale — said to be the final one — the collection has realized more than $61 million, making it the most valuable numismatic collection ever auctioned.

Not too shabby for a cabinet without a single Federal coin in it!

Prices in the first Ford auction tend to look cheap after a decade, though they were gasp-inducing at the time. Of course, for most of the items therein, nothing has sold since that time that offers any apt comparison.

Several Fugio copper collections have sold in the interim, as Fugio collecting has become much more mainstream since 2003 and prices have generally increased, but nothing of Ford’s quality or scope has been offered within the New Jersey or Vermont copper specialties in the intervening decade. Given that most of Ford’s state coppers had been off the market for nearly a century, this is no great surprise.

If the Ford auctions really have come to an end, this marks a watershed moment in American numismatic history. Though there are always long-term collections hiding out, mostly forgotten except by a handful of old-timers, simply nothing like the Ford Collection is waiting in the wings. It took several lifetimes to build, mostly assembled by F.C.C. Boyd, but dutifully preserved by Ford.

Now that this amazing concentration has been dispersed, perhaps the pieces that were once deemed rare, then became momentarily common, will go back to being rare again.