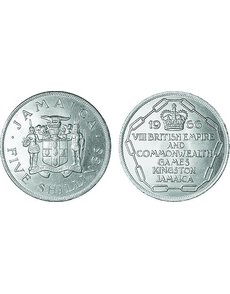 Whenever I go to my bank in order to obtain coin rolls for searching, I always remind myself to ask the teller for large-size dollar coins.

Rolls containing Eisenhower dollars are seldom available, but when they are, I am always happy to take them off any bank teller’s hands. Of course, not wanting to run afoul of the law, I first make the proper exchange of cash for the coins.

Anyway, after recently asking my favorite teller if the bank indeed had any large-sized dollar coins to get rid of, she said “Yes,” and that they were in an envelope containing 20 coins. She continued to tell me that what was initially thought to be an entire roll of 20 Eisenhower dollars turned out to be 19 Ikes plus, what she described as one other, “very weird coin.”

Since it was discovered that they didn’t have a full roll of U.S. dollar coins, they emptied the wrapper of its contents and placed the 20 coins in an envelope until they could figure out what to do about the single unusual piece. I gladly solved their dilemma by offering them $20 for the envelope, “weird coin” and all. The bank happily accepted my offer.

When I got out to my van, I briefly examined the coin that was not like the others and discovered that it was a 5-shilling piece of Jamaica.

Later, after arriving at home, I was able to do a little more research on this really cool, large sized coin. About the same size as an Eisenhower dollar and dated 1966, this piece was struck in a copper-nickel alloy in commemoration of the VIII British Empire and Commonwealth Games held in Kingston, Jamaica, from Aug. 4 through 13, 1966. According to the 2011 Standard Catalog of World Coins 1901-2000, 38th Edition, George Cuhaj, editor, the reported mintage of this coin was 190,000. The catalog also noted that 20,000 Proof versions of this coin were struck.

The obverse of the coin depicts the coat of arms of Jamaica. Included in the coat of arms are a crocodile on a crested shield, a man with bow to the right, a woman with a shield to the left and a legend on a banner below the crest. The legend reads out of many one people. If that sounds familiar, it should. If the legend were written in Latin, it would read “E Pluribus Unum,” like U.S. coins.

The coin’s reverse features a crown, dividing the date, placed above the inscription viii british / empire / and / commonwealth / games / kingston / jamaica with the entire reverse design surrounded by a chain link wreath.

Please share your finds with me. Use the Submit Question button at www.askaboutcoins.com to send me an email.