Collectors ask every day how much is rare worth 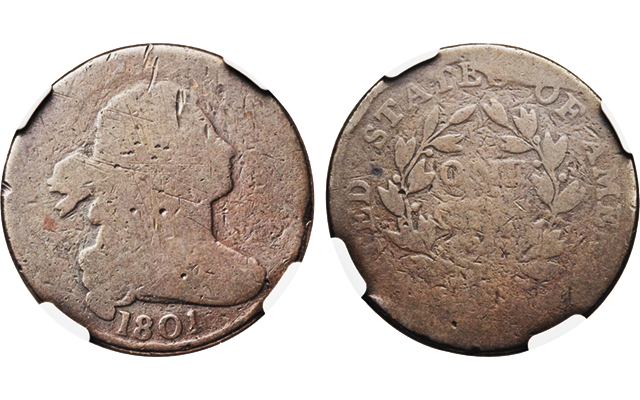 How much is rare worth? That’s a question we collectors ask every day. The answer is all over the place.

A United States coin with a known population of less than 10 or 15 is an incredibly rare piece. 1913 Liberty Head 5-cent pieces, 1894-S Barber dimes and 1804 silver dollars all come immediately to mind, and all cost more than $1 million each, some much more.

However, on the less traveled byways of the hobby, equally rare coins trade for less than 1/500 of the price of the hobby’s stars.

This phenomenon was evident at Heritage Auctions’ sale of the Adam Mervis Large Cent Collection at the Florida United Numismatists show in January. The sale included more than three dozen NC (noncollectible) coins. More than 20 others were Rarity 7 or R-8, prohibitively rare pieces, generally with fewer than 10 known.

Large cent collectors run the gamut from casual to dedicated. Some collect by type; others by date, “Red Book listing,” Sheldon and Newcomb numbers, or die state.

The toughest coins are the NC or noncollectible die combinations. They are listed in standard reference works, but are so rare that most collectors don’t even think about including them in a set.

Every collector knows what an 1804 Draped Bust dollar is and lusts after one. Only a relative handful of collectors, though, know what an NC-2 1801 Draped Bust cent is, and even fewer want to buy one. With only eight pieces known, rarity is high. But demand is low. Consequently, the price is low, too.

The coin was unknown before 1928, and all examples are well circulated. The finest known piece, graded Very Fine 25 by Numismatic Guaranty Corp., sold for $14,950 in 2005.

At $2,702, the coin is not much more expensive than an Uncirculated 1914-D Lincoln cent. The 1914-D cent, a key to the Lincoln cent series, has a mintage of 1.2 million pieces. It is 225,000 times more common than the genuinely rare 1801 cent. A collector could easily buy a dozen 1914-D Lincoln cents in five minutes on even the smallest bourse floor.

The 1801 NC-2 cent, on the other hand, is rarely on the market. Heritage has handled just three during the past decade. It’s likely that not even one could be found at the nation’s largest convention.

Which would you rather own?