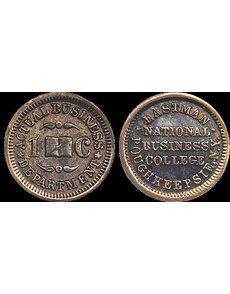 Harvey Gridley Eastman, a commercial school operator in Poughkeepsie, N.Y., and other cities, stressed a “hands on” approach. His attention to detail was so exacting that he had scrip printed up to facilitate student transactions during class assignments.

For a brief period early in the school’s existence, he also had “coins” made to facilitate these lessons. The only type presently known, a copper-nickel “1 C” 1-cent token, is listed like a Civil War store card as Fuld NY760A-1d (U.S. Civil War Store Cards by George and Melvin Fuld).

Although the Fulds’ inclusion of the piece is consistent with earlier writers on the Civil War issues, this token it is not a Civil War store card, but another prop of Eastman’s actual business curriculum.

The token was originally purposed for use in the school’s Actual Business Department. Eastman intended to satisfy the small change needs within his institution, not those of the world at large. The token itself bears the inscription ACTUAL BUSINESS DEPARTMENT, which was the marketplace to which Eastman’s Theory Department students graduated. Furthermore, college literature of the period mentions that students would be supplied “specie” as well as notes as instructional tools. This is the “specie.”

I acquired my first two of these tokens at the 1977 Atlanta American Numismatic Association convention. According to Tom DeLorey, a Coin World colleague at the time, one weighed 63.581 grams with a specific gravity of 8.765. The other weighed 62.809 grams, with a specific gravity of 8.479, almost precisely the characteristics of the government cents at the time. A third example acquired later weighed between those two, so that is probably a reasonable range for these pieces.

Although this Eastman token was not intended as a store card, it was mentioned as such in the numismatic literature as early as July 1869 in the American Journal of Numismatics. It was similarly listed as one of the “War of the Rebellion Tokens” in an April 1883 installment of the Coin Collectors Journal. Although undated, we may fairly surmise that it actually was in use prior to March 1, 1863, when the school introduced paper cents into its curriculum.

In the 1970s, when this token was believed to be Rarity 7 (fewer than 20 known), one collector-dealer attempted to “corner” this scarce single-merchant New York token as a key to a New York state “set.” He managed to acquire about a dozen pieces, since liquidated. Today, collectors believe it to be an R-5 piece (75 to 199 known). However, the token is sufficiently obscure that in the 1970s when I cataloged the Eastman school’s archives, curators there were unfamiliar with it.