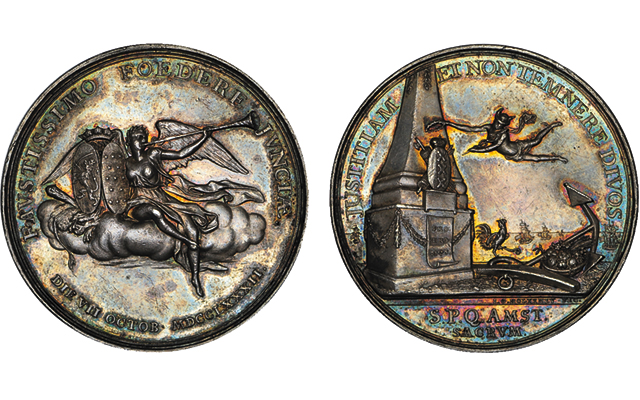 Medals celebrating the end of the American Revolution were among the hundreds of Betts types discussed in the class. Illustrated is the 1782 Treaty of Commerce between the Netherlands and U.S. silver medal, Betts-605.

For more than a decade, I’ve had the privilege of teaching a class on early American numismatics with my friend Erik Goldstein at the annual American Numismatic Association Summer Seminar.

It started simply enough, covering Colonial coins, along with some world coins and a few relevant medals. At some point along the line we added coverage of Colonial paper money, then more on medals, until we were completely overwhelmed.

This year, we decided we could spend a whole week talking about just other material made of metal. We called the course “Colonial Americana: Medals, Metals, and More,” and filled out a lengthy syllabus with everything from love tokens to calendar medals, from Indian trade silver to the Comitia Americana medal series.

The material almost overwhelmed us once more.

Starting with the nature of trade in post-contact America, our class examined items that were once confined to the catch-all category “odd and curious money.” Beads ranged from the sorts traded by the first Spaniards, to show up in the modern United States just decades after Columbus, to the Russian beads that Lewis and Clark encountered at the Oregon coast.

From trade axes to finely made silver brooches, we allowed archaeology and original documents to help us define the original “money” of the American frontier.

Once we got to items that were actually round, we really hit our stride, covering all the ways a coin could be altered to change its usage during its useful life: cutting, plugging, engraving, and more. We even studied holes.

From there, it was just a short jump to medals, struck and cast. Military medals worn during and after the Colonial-era wars, fraternal badges depicted in 18th century paintings, and medals pressed into service to award to Native Americans all got their due.

It took us two full days before we even got to Betts medals. The Betts series, as cataloged by C. Wyllys Betts in American Colonial History Illustrated by Contemporary Medals, was examined frontwards and backwards, in pictures and in hand. The class saw early Washington medals, Indian Peace medals, medals they knew and medals they’d never dreamed of.

We never even got to calendar medals. Alas, it’ll be a few years. Next year’s seminar will discuss nothing but paper. I can’t wait!