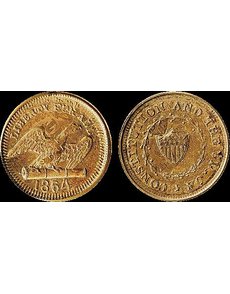 1864 patriotic Civil War token struck over an 1860 copper-nickel Indian Head cent with certain of the cent inscriptions still readable is one of the Tanenbaum pieces Hayden and Bowers acquired. The gem Mint State piece is the Fuld 60/436do variety (Patriotic Civil War Tokens by George and Melvin Fuld).

One of the finest and most complete collections of Civil War store cards and patriotic tokens ever to come to market has been purchased jointly by Q. David Bowers and Steve Hayden, the buyers announced March 14.

Portions of the collection will be offered at auction and at retail in the future.

The collection of nearly 5,000 tokens was carefully assembled over many decades, beginning in the 1960s, by Steve Tanenbaum, a noted token and medal dealer, collector and researcher.

The vast majority of the tokens are in Mint State. Many are rarities, including varieties that have not been offered in the marketplace for many years, according to the purchasers.

Until his untimely passing last year in Brooklyn, N.Y., as one of four victims of a murderous rampage, Tanenbaum was the epicenter of research on this specialty, according to the purchasers. He had a wealth of knowledge on history, die varieties, rarity and other aspects, and worked closely with the Civil War Token Society. In addition, for many years he was a partner in Rossa & Tanenbaum, token and medal specialists, until Rich Rossa retired. In later years Tanenbaum worked with Hayden.

Approximately half the collection has already been professionally certified, including countless numbers of finest known and finest graded examples, and others will be certified in coming months, according to the buyers.

By arrangement with Tanenbaum’s estate, the collection was divided and sold separately, with Hayden handling the patriotic, Indiana, Michigan and Wisconsin portions and Bowers handling the Ohio, New York, Illinois and Tennessee portions.

The transaction was in excess of $1 million each for Hayden and Bowers.

The field of Civil War tokens includes privately issued pieces with political and patriotic motifs and a larger section with Indian Head, Liberty Head and other designs on one side and advertisements for merchants and services on the other.

Civil War tokens were privately issued emergency money, introduced in 1862 and produced to circulate in place of small-change federal coinage, which was hoarded as quickly as it was struck and placed into circulation. During the early years of the war, all federal coinage was withdrawn from circulation by the public because of concerns about the war and as federal paper money lost value compared to the value of coins.

“I have collected these fascinating tokens since the 1950s,” Bowers noted. “I will retain about two dozen basic types I don’t have, and the thousands of others, including varieties I do not own, will be made available to a new generation of enthusiasts.”

This will be by far the largest and finest collection of Civil War tokens to appear in the marketplace in our generation, according to Bowers.

Before any are sold, photographs of rarities needed by the society for the new third edition of U.S. Civil War Store Cards by George and Melvin Fuld will be supplied by Bowers and Hayden.

Bowers plans to devote time studying his acquisitions and then placing many of them on the market via Stack’s Bowers Galleries (www.stacksbowers.com) auctions and other retail programs.

Sales inquiries for Bowers’ portions of the Tanenbaum Collection can go to ckarstedt@stacksbowers.com.

Any research questions can be sent to Bowers at via email directed to qdbarchive@metrocast.net. ¦