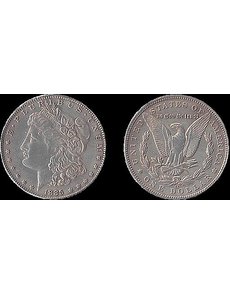 The author purchased from a seller in China a coin that had been identified as a PCGS MS-64 1878-CC Morgan dollar, and stickered by CAC. What he received was a well-made counterfeit 1885-CC Morgan dollar. He was able to obtain a refund, and still retain the bogus piece.

A few months ago, I predicted that Congress would take up the issue of high-quality counterfeit U.S. coins being sold to collectors, mostly imports from China.

Although the Hobby Protection Act, and its corresponding regulations, located at 15 United States Code §2101 et seq. and 16 Code of Federal Regulations §304.1 et seq., prohibit the manufacture and importation into the U.S. of “original numismatic items” not marked “COPY,” the act does not punish the actual sale of such items in the United States.

Prohibition of the manufacture of such coins in the United States doesn’t affect Chinese manufacturers, who claim that they are not breaking any Chinese laws.

Nor can importation restrictions stem the tide of Chinese imports when the coins are difficult to identify as they enter the United States and often do so in such small quantities as to make enforcement impractical.

I speak from personal experience, having recently purchased a counterfeit coin from China. I saw a listing on Alibaba Express, one of the leading Chinese “eBay-type” Internet sites, for a “100% Genuine 1878-CC $1 PCGS/CAC MS64+ PL Morgan Dollar” from a seller in Zhejiang, China.

There was a picture of the coin in a Professional Coin Grading Service holder, with a Certified Acceptance Corp. sticker affixed, and the PCGS certification number checked out on PCGS.com.

The fact that the coin with that particular number had sold in a Heritage auction last year didn’t surprise me, as I expected a high-quality fake anyway.

I paid the asking price of $49.99 and waited. A couple of weeks later the coin arrived, having been shipped from Hong Kong.

Other than the word “Morgan” scribbled on the envelope in red ink, there was no indication that a coin was inside.

The coin was a decent fake, although it was raw and was an 1885-CC Morgan dollar. I asked for a refund, the seller refused, and ultimately Alibaba refunded my payment. I kept the coin.

This scenario no doubt would have been inconceivable to the Hobby Protection Act’s original drafters, who expected that counterfeits would appear in quantities traceable to a single source, and would be subject to seizure at the border. It’s clear that the act needs some updating.

H.R. 5977 makes it unlawful to sell unmarked “replica” coins, provide “substantial assistance” to someone manufacturing, importing, or selling them, or to infringe trademarks (such as “PCGS” and “CAC”) in connection with replica sales.

Armen R. Vartian is an attorney and author of A Legal Guide to Buying and Selling Art and Collectibles.