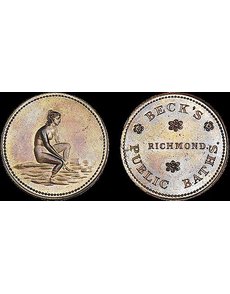 A rare Mint State example of the Beck’s Public Baths token of the early 1830s, which is listed as Number 86 in Q. David Bowers and Katie Jaeger’s reference, The 100 Greatest American Medals and Tokens.

When I bid on or buy and item for my collection, the “because I like it” phrase is my main motivation. Value is not at all important. High grade is of course desirable, but only if priced within reason. Most of my acquisitions have been inexpensive.

The way I enjoy my collection is to scan each item on my Epson Perfection V500 Photo scanner, put it in a safe deposit box, and then view it on my computer.

I do, however, have some expensive items. One favorite is a 28.5-millimeter copper token issued by Beck’s Public Baths. In 2008 when Katie Jaeger and I wrote The 100 Greatest American Medals and Tokens, those who participated in the election-survey placed this in the No. 86 position.

Today in America, most of us take baths daily or at least regularly. It was not always so. Across the country, some colleges and boarding schools made it an offense to bathe in the colder months, the practice being deemed unhealthy. In the early 19th century, most houses did not have indoor plumbing, or if they did, as in some of the larger cities, hot running water was not available. For those who wanted to keep clean, the public bath was the way to do it. These remained popular in some areas into the early 20th century.

In Richmond, Va., in the early 1830s, Charles Beck opened Beck’s Public Baths. The facility remained in operation for nearly two decades. To promote his business he contacted James Bale, New York City diesinker, and commissioned a token depicting on one side a Raphaelesque nude woman bathing and on the other his advertisement. Probably, thousands were issued, based on an estimated 150 to 200 surviving today. Most show signs of wear. An About Uncirculated token would be exceptional and one in Mint State especially so.

In 1858, numismatist Charles I. Bushnell published An Arrangement of Tradesmen’s Cards, Political Tokens, also Election Medals, Medalets, &c. Current in the United States of America for the Last Sixty Years, Described from the Originals, Chiefly in the Collection of the Author. This pioneering work engendered an interest in collecting such pieces.

A Dec. 1, 1859, letter from Philadelphia collector J. Ledyard Hodge, to R. Alonzo Brock, a Richmond numismatist, included this: “Can you procure any more of the card you sent me, ‘Beck’s Public Baths’? I will take any you can get with pleasure, as I have three or four friends here who want them.”

They have been popular ever since!