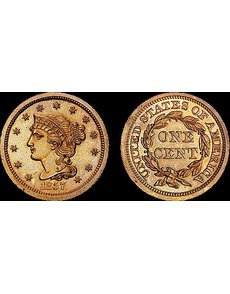 The discontinuation of the large copper cent in 1857 evoked a wave of passion with the public, and many people sought to find as many different dates as they could.

Bill Maryott, who has been an enthusiastic collector of large copper cents for well over a decade and is a familiar figure in the Early American Coppers group, recently sent a picture of an interesting “hoard.”

Bill recalls that the hoard brought about $1,500 to $2,000 when it was sold on eBay in the year 2000. The half cents and cents were collected by date and mounted on a board, secured in their places by tacks! This worked, of course, but no doubt the coins showed the effects of this. The rarities were missing, but most of the dates were represented.

Speaking of tacks, longtime collectors may remember the Nathan M. Kaufman Collection, auctioned by Rarcoa in August 1978. Kaufman (1863 to 1918), was a native of Marquette, Mich. His business interests included the Congress Hotel on Chicago. His brother, Louis, was deeply involved in banking (First National Bank of Marquette; Chatham and Phenix National Bank, New York City). In later years the N.M. Kaufman Collection, as it was designated, was displayed in the directors’ room of the Marquette bank.

Most of the coins were affixed to the display boards with the use of glue or tacks. In the Rarcoa catalog, such marks were noted when they were found. The gold series included date sequences, plus some Mint marks, of denominations from $1 to $20. Proof coins were in abundance including the rare high denominations of the 1860s onward — an impressive array with few equivalents anywhere. The highlight was one of only two known 1825/4 Capped Head $5 half eagles.

I have always had an interest in coin hoards, large and small. It is always interesting when something enters the marketplace unexpectedly, having been hidden away for dozens of years or even a century or more as with the coppers in Bill Maryott’s picture. Of course, mounting them with tacks to a board is not the way to go — but in the case of these half cents and large cents, perhaps they would not have been saved otherwise.

Large copper cents, more than any other denomination, inspired more people to become numismatists in the early days. There is a remarkable aspect to such cents: Ever since 1857 the market for them has been strong! In good economic times and bad, if charted at decade intervals, the price trend has always been upward!