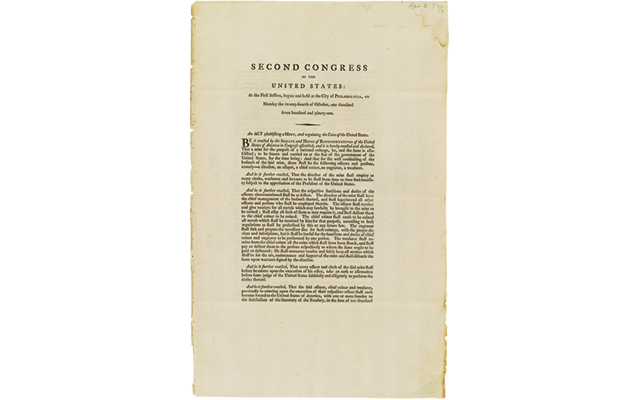 First page of a five-page document hand-signed in 1792 by Thomas Jefferson establishing a Mint and the dollar as legal tender for the United States sold for $118,750 at auction April 8, 2014, by Swann Auction Galleries. 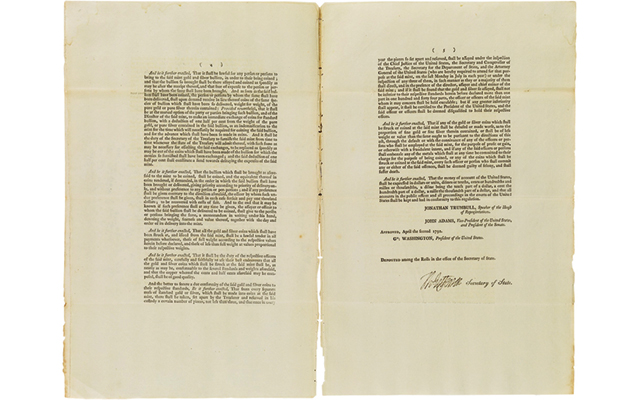 An example of the first printing of the Coinage Act of April 2, 1792, establishing a Mint and the dollar as legal tender of the United States sold for nearly $120,000 at auction April 8, 2014, by Swann Auction Galleries in New York.

The five-page document printed on three unbound sheets of paper and hand-signed by Thomas Jefferson as secretary of state on April 2, 1792, sold for $118,750 including the buyer’s fee. The document was estimated to sell at between $50,000 and $75,000.

“The ninth clause lists the denominations of coins which can be produced by the new mint. The most important was ‘Dollars or Units — each to be the value of a Spanish milled dollar as the same is now current, and to contain three hundred and seventy one grains and four sixteenths of a grain of pure, or four hundred and sixteen grains of standard silver,’ ” according to the catalog description. “The other denominations, ranging from ten-dollar gold ‘Eagles’ down through quarter dollars, ‘dismes,’ cents, and half cents, are all defined in relation to the dollar.”

The 10th clause mandates that each coin bear the word “Liberty,” and that the gold and silver denominations read “United States of America” and bear an eagle on the reverse.

The final clause dictates that “the money of account of the United States shall be expressed in dollars or units, dismes or tenths, cents or hundredths, and milles or thousandths,” per the catalog description.

The document is certified with Jefferson’s signature at the bottom of the final page. It is also “signed” in type by Jonathan Trumbull as Speaker of the House, John Adams as vice president, and George Washington as president.

The act is printed on paper made by Henry Schutz in Pennsylvania, with his “HS Sandy Run” watermark — the same paper favored by George Washington for his private correspondence, according to the catalog description

For more information about this auction or future sales, contact Swann Auction Galleries, 104 E. 25th St., New York City, NY 10010; telephone the firm at 212-254-4710; or email the business at swann@swanngalleries.com.

Also visit the firm’s website for upcoming auctions at www.swanngalleries.com.