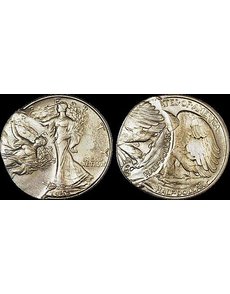 Among the dramatic error coins from the Geyer Family Collection offered by Heritage in its Nov. 1 New York auction is an MS-63 double-struck 1945-S Walking Liberty half dollar with the second strike struck 55 percent off center.

November is shaping up to be a huge month for the rare coin market with three major U.S. auctions, including Heritage’s second sale of treasures from Eric P. Newman’s collection.

Heritage starts the month off with its U.S. coin auction, Nov. 1 to 3, in New York. It is a surprisingly robust standalone sale not associated with any major coin show. Among the lots in the premier session is a Numismatic Guaranty Corp. Mint State 64 1893-S Morgan dollar with some soft obverse rainbow toning.

Perhaps most interesting is Indiana collector Fred Geyer’s collection of errors from 1941 to 1945 including classic off-metal 1943 and 1944 Lincoln cents and a substantial holding of error Walking Liberty half dollars.

Next on the calendar is Stack’s Bowers Galleries’ auction in conjunction with Whitman’s Baltimore Coin and Collectibles Expo, Nov. 6 to 8. A sale highlight is David M. Sundman’s collection of early Massachusetts silver coinage.

Other rare offerings include a deeply toned Branch Mint Proof 65+ 1893-CC Morgan dollar graded by Professional Coin Grading Service and having a green Certified Acceptance Corp. sticker. It had previously sold at an Aug. 18, 2011, Stack’s Bowers auction, where it brought $149,500.

Joining it is a PCGS Very Fine 35 1854-S Coronet gold $2.50 quarter eagle, one of just a dozen or so known. It was once part of the Norweb Collection and is the fifth finest known based on the catalog’s condition census.

All eyes will be back to New York on Nov. 15 to 16 when Heritage presents its second Newman auction this year. The rarities are too numerous to list; more than 1,800 coins will be offered in the auction with an estimate exceeding $15 million.

Not all the coins are rare, but they have been off of the market for decades, including a large group that was purchased from the estate of legendary collector “Colonel” E.H.R. Green more than 70 years ago.

Perhaps most exciting of these early coins is a 1796 Draped Bust quarter dollar graded NGC MS-67+ Star. An accompanying press release noted that it’s been widely acknowledged in numismatic circles as “the most beautiful American silver coin that exists today.” While that’s certainly a bold statement, those who have had the opportunity to view the coin would likely find it hard to disagree. ¦