Coins from the Philippines found in rolls 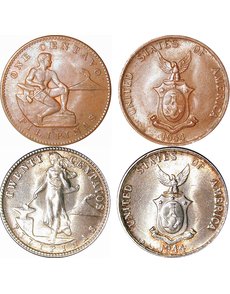 Recent roll searching brought to light two coins struck by the U.S. Mint for the Philippines during World War II. The 1944-S 1-centavo coin, top, was struck at the San Francisco Mint. The other coin found in a roll of U.S. coins was a 1944-D 20-centavo coin struck at the Denver Mint, bottom.

For this week’s column, I concentrated my efforts on searching through rolls of cents, 5-cent coins and quarter dollars.

At first, I thought that I was going to have a tough time finding anything worthwhile to report.

But as you will see, what started out being somewhat discouraging ended up resulting in some pretty neat discoveries.

Looking through the cent rolls produced some really beat up Lincoln, Wheat cents that were, in fact, so bad that I placed them back into the wrappers to let them continue on their paths to their ultimate demise.

But all was not lost. The first collectible coin to make an appearance emerged from a roll of what should have been all United States quarter dollars.

I found a 1944-S 1-centavo coin struck by the San Francisco Mint for use in the Philippine Islands.

When the Spanish-American War ended in 1898, the United States obtained sovereignty over the Philippine Islands from Spain.

From 1903 to 1945, coins for the islands were struck at the U.S. Mint facilities at Philadelphia, San Francisco and Denver in the United States, and from 1920 to 1941, at the U.S. Mint’s only foreign facility, in Manila.

The coins are clearly for use in the Philippines, but on the 1944-S 1-centavo coin, the S Mint mark is visible on the reverse, near the rim, to the left of the date.

I would grade this coin, which exhibits only a slight amount of wear, as Extremely Fine 45.

Having already discovered one coin from the Philippines, I wasn’t expecting to find another piece, as it is more common, for me, to find World War II-era Philippine coinage here and there while roll searching over a long period of time.

Shortly, however, a roll of 5-cent coins yielded a surprising find — a 1944-D 20-centavo coin, struck at the Denver Mint.

This coin is not the over Mint mark variety — the 1944-D/S 20-centavo coin. Those coins display the D Mint mark stamped over an S Mint mark. Nevertheless, I thought it was neat to find this coin in a roll of 5-cent coins.

I grade this coin as About Uncirculated 55; it retains most of its original luster.

This is probably a good time for me to point out that with enough searching, no matter how poor the pickings may seem to get, eventually good stuff will begin to turn up again.

Remember, if the searching gets rough, you never give up. Good luck in your searching!