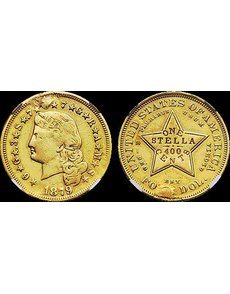 Lest one think that strong prices are only for coins in top condition, this 1879 Flowing Hair Stella that had been harshly cleaned and plugged brought $47,000 at a July 11 auction. Last year the same coin was auctioned for $32,200.

July is typically a quiet month for the rare coin market as dealers enjoy a breather, perhaps take a vacation, and prepare for August’s American Numismatic Association World’s Fair of Money.

Tiny jumps in quality continue to be separated by huge dollar amounts as seen by a 1937 Walking Liberty half dollar graded Mint State 68 by Professional Coin Grading Service, with a green Certified Acceptance Corp. sticker, that brought $35,250.

It was described as an incredibly preserved coin that could be mistaken for a Proof and was one of three comparable PCGS coins and the only one with a green CAC sticker. A year ago Heritage sold an MS-67+ example of the issue with a green CAC sticker for $8,812.50, and “normal” MS-67 examples sell at the $1,300 level. Again, proof of what a difference a single grading point can make.

At the other end of the quality spectrum was one of the most affordable gold $4 Stellas in today’s marketplace. An 1879 Flowing Hair Stella graded by Numismatic Guaranty Corp. as Extremely Fine details, Plugged, Harshly Cleaned, would not win any beauty contests but serves as a solid “filler” for the type and brought $47,000. As the cataloger aptly wrote, “For many collectors who would otherwise be shut out of owning this famous issue, all the problems taken together are not enough to wipe away this truth: it is still a Stella.”

At Heritage’s Jan. 4, 2012, FUN auction, the same coin brought $32,200, with the new price representing a substantial increase. It was offered in the same NGC holder both times.