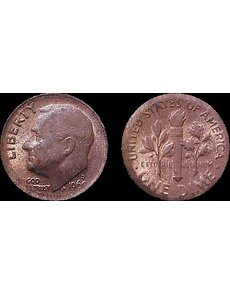 This 1969-D Roosevelt dime was struck on a copper core. The clad layers separated from the core after blanking but before the strike. 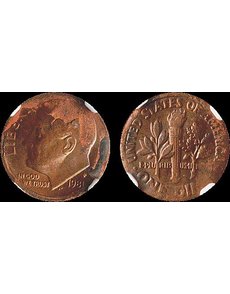 Both clad layers dropped off before this copper core was struck as a 1981-P Roosevelt dime. In this case, separation of the clad layers was probably facilitated by excessive heat in the annealing oven. (Images show holder tabs.) 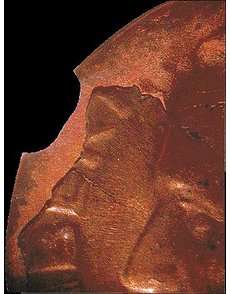 A fine matte texture is seen where copper flaked off the surface of the core after the strike on the 1981-P dime. 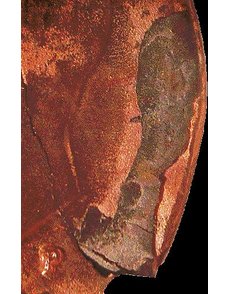 A small island of dark gray metal (presumably copper-nickel) dives into the copper core at one side of the 1981-P dime obverse.

The advent of clad coinage in 1965 expanded the number and variety of planchet errors available to the collector.

The process of fabricating and then bonding two coils of clad strip to a middle coil of core strip invites numerous mishaps as does the subsequent rolling of the composite strip to coin thickness.

One of the rarest bonding errors is the “struck core,” wherein both clad layers fall away after the blank is punched out. While it’s common for one clad layer to fall off after blanking, I have only seen or heard of a handful of cases where both layers have been lost. They include two Roosevelt dimes struck on copper cores (both shown here), two to three Washington quarter dollars struck on copper cores, and a 1965 Kennedy half dollar struck on a 79 percent copper and 21 percent silver core. All are naturally quite thin and significantly underweight, and most show weakness in the strike.

Most struck cores are thought to be the result of improper cleaning. Both sides of the core strip and the internal surface of each clad strip must be meticulously cleaned prior to bonding. The surfaces are scoured clean by rotating descaling brushes that often leave fine striations on the surface.

Our first illustrated coin is a 1969-D Roosevelt dime struck on a copper core. Since each copper-nickel clad layer weighs approximately 0.4 gram, the expected weight of the core alone would be 1.47 grams. The reported weight of this dime is 1.4 grams, which is close enough to clinch the diagnosis.

The weakly-struck areas on either face show no fine striations, which may mean that this portion of the strip wasn’t cleaned at all. This conclusion is not certain however, as the presence and distinctness of striations is somewhat variable in the more commonly seen counterpart to this error, the isolated struck clad layer.

Our second piece is a 1981-P Roosevelt dime struck on very different-looking copper core. A small island of gray metal appears on the right side of the obverse face and a few flecks of gray metal on the reverse face. I have my doubts that the gray metal is remnant cladding because the southern tip of the obverse patch actually dives beneath an adjacent flap of copper.

Cladding should always occupy a superficial position relative to the core. I believe that either copper atoms migrated so as to partly envelop this island of cladding, or this dark gray patch represents an area of core material enriched by migrating nickel atoms.

At 1.3 grams, the coin is a bit lighter than expected. The reason is immediately apparent on close inspection. Before and after the coin was struck, moderately thick layers of copper spalled off the obverse face in several places, exposing interior metal with a fine matte texture. Even the intact portions of the obverse surface show cracking and flaking.

The features described above are consistent with an improper annealing error. Such errors occur when copper-nickel clad or solid copper-nickel planchets are exposed to excessive heat or when oxygen floods the annealing oven. Within the alloy, copper and nickel fractions tend to segregate out (copper usually to the surface). Areas of copper-nickel often darken to a gray or black color. Planchets become brittle, the surface often cracking and flaking. Metal exposed by missing flakes has the aforementioned fine matte texture.

In the case of this 1981-P dime, it’s likely that the intense heat weakened the bond between the clad layers and the core, causing separation after blanking. The heat also rendered the core brittle and friable. Given this scenario, one would expect to find some single-sided missing clad errors with the characteristics of an improper annealing error, but I have yet to encounter one.