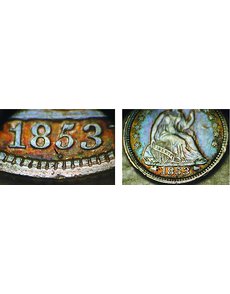 A dot that appears below the date on this 1953 Seated Liberty half dime is believed to be a point from which the digits in the date could be oriented.

This month we take a look at an 1853 Seated Liberty, With Arrows half dime variety that has proven elusive since the time it was first publicized in 1999. It is owned by Linda Hagopian of Michigan who apparently first reported the variety.

I hadn’t seen the coin since 1995 and was pleased to see it reappear while I was shooting photos at the 51st Suburban Detroit Coin Show held Jan. 27 to 29 in Livonia, Mich. While the coin sports an insignificant 8/8 in the date, its most enigmatic feature is a very clear “dot” below the 5 of the date.

At first glance, one might just write it off as being an unusually placed random die chip, but under microscopic examination it can clearly be seen to be an intentionally punched dot; it is circular and more or less flat-topped as many dots go.

I sent a photo of the coin out to the Al Blythe (now deceased), author of The Complete Guide to Liberty Seated Half Dimes, and learned in a May 5, 1996, letter from him that he also had a coin of the same date and type with a dot that he felt sure was not a random die chip but an intentional “dot.”

The difference was that the dot on his coin was in the center of the lower loop of the 8! The mystery grew.

Later I wrote an article on the coin for the April 1999 issue of the American Numismatist Association’s journal, The Numismatist, to which Joseph E. Dinardo, New York sculptor, engraver and minter, responded in a letter and explained his logic for the dot:

“As a die engraver it is routine practice to locate specific positions of numbers or letters on a die. At the mint during the 1840’s and 50’s, a logo type (3 digit punch) was used for the first 3 digits of the date. The last digit was placed singularly as the year changed. It is my belief that the punching of the last digit in the year date was placed ‘first’, then the logotype ‘185’ was punched last. Therefore it was extremely important that the ‘3’ be correctly placed first,” Dinardo said.

Dinardo went on to describe how by using the stationary point of the dot with a compass, he arrived at the conclusion that “the ‘dot’ is definitely a point used by the engraver to position the ‘3’ ” stating further that it (the dot) was deeper than it should have been and as such was not “stoned or buffed out prior to die hardening.”

But with all that said, it does not explain why no other examples have been found in the dozen years since I last wrote about this 1853 variety.

Does anybody else have an example or have any theories to add to this continuing mystery? Dinardo’s complete letter and sketch can be seen here: http://koinpro.tripod.com/Articles/DinardoLetter.pdf.

Ken Potter attributes U.S. and world doubled dies. He can be contacted via e-mail at kpotter256@aol.com.