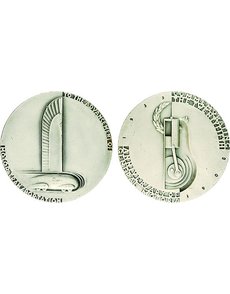 The 25th anniversary of General Motors in 1933 was celebrated with this 77-millimeter bronze silverplate medal by Norman Bel Geddes.

Few American medals can compete for dramatic modernistic design with Norman Bel Geddes’ 1933 General Motors 25th Anniversary medal. This 77-millimeter bronze silverplate medal boasted the most revolutionary design of its decade through the concept of streamlining.

Norman Bel Geddes was born Norman Melancton Geddes in Albion, Mich., in 1893, son of stockbroker Clifton T. and Flora Euelle Geddes, née Yingling. The distinctive name under which he is best known was adopted on his 1916 marriage to Helen Belle Schneider when the newlyweds combined their names as Bel Geddes. Their exotic name was further publicized by the successful stage and movie career of their daughter, Barbara Bel Geddes.

The designer burst onto the show business scene in Los Angeles as a brilliantly innovative set designer for Aline Barnsdall’s Little Theater in 1916 and 1917, and in 1918 at New York’s Metropolitan Opera.

His work was featured in such theatrical works as Arabesque, The Five O’clock Girl and Sonja Hennie’s It Happened on Ice, and New York stage sets for the great Max Reinhardt.

Bel Geddes made his mark in industrial design with his own studio after 1927, where he created exciting designs for such diverse products as cocktail shakers and radio cabinets, the dramatic Art Deco House of Tomorrow and his nine-deck amphibious airplane, “Airliner Number 4.” In 1936, he designed “Metropolis City of 1960,” which attracted widespread attention and some controversy.

The medal obverse bore his eight-wheeled streamlined auto as a key design element, as it sped to the right as if in a wind tunnel, a huge upright wing towering over it. The smooth field was broken by two recessed rim segments at top right and lower left bearing the raised-letter legend to the advancement of – motor transportation.

The reverse was divided vertically by a stylized automotive engine piston with its fascinating suggestion of vigorous motion, tiny incuse dates 1933 – 1908 near the rim, recessed segments bearing the concentric legend commemorating the twentyfifth – anniversary of general motors.

Though this medal is not a major rarity it is always in demand as an art object as well as a highly collectible medal of exotic beauty.