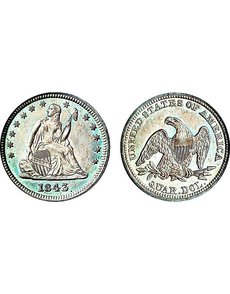 Coins like this 1843 Seated Liberty quarter dollar did not circulate in eastern metropolises in 1851, but in 1861, lots of Seated Liberty coins circulated. In 1871, no silver coins at all were in commerce. By 1881, they reappeared.

Last week I mentioned an exchange I had with collector Ray Williams about information received unsolicited on the Internet, including a list of facts that are stranger than fiction.

Ray suggested that I should write a column or two about weird facts in numismatics. A nod goes to the late Walter Breen, who published many in his time, sometimes prefacing a comment with “Just as a guinea pig is not from Guinea, nor is it a pig,” this or that coin is odd.

? In New York City and other eastern metropolises, in 1851 no Seated Liberty coins were in circulation at all, although a couple of years earlier they had been common. Instead, Spanish-American silver coins were everywhere. In 1861, lots of Seated Liberty coins circulated, but none from Spanish America. In 1871, no silver coins at all were in commerce. In 1881 there were lots of them.

? In 1862 the Treasury Department decreed that ordinary postage stamps could be used as money.

? In 1961 the rarest of all Morgan silver dollars in Mint State was considered to be the 1903-O coin. Most hobbyists had never seen one. Today it is abundant.

? The Republic of Vermont was not a state in the Union in 1785 when it issued its own coins. Accordingly, a collection of coins from different countries would need a Vermont copper to be complete.

? No one knows the identities of the various women whose images appear on early American coins.

? In the 1860s Treasury Department constructed a Mint at The Dalles, an Oregon town on the Columbia River, but never used it to strike coins.

? When the “mini-dollar” was proposed, Chief Engraver Frank Gasparro prepared and recommended a Liberty Cap, Flying Eagle design, a tribute to early American numismatics. “Political correctness” intervened, and Congress mandated that Susan B. Anthony be used.