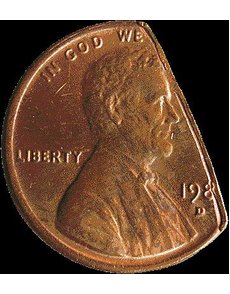 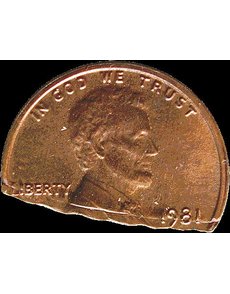 A “sawtooth” straight clip is seen on this 1981 Lincoln cent. 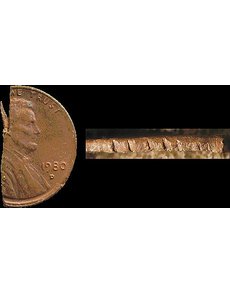 A dull sawblade may be responsible for the spur and cutmarks on the edge of this 1980-D Lincoln cent. 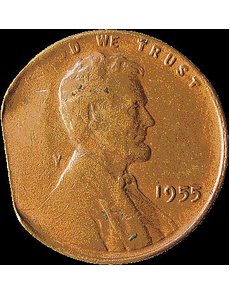 A tapered planchet terminates at a straight clip on this 1955 Lincoln cent. 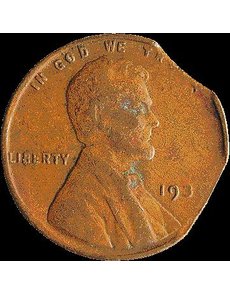 This 193x Lincoln cent shows a curved clip in combination with a straight clip. 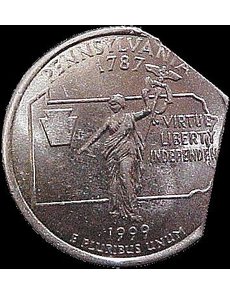 This 1999-P Pennsylvania quarter dollar has a corner clip. The error provides direct evidence that blanking dies can overlap the both the ends and the sides of the strip.

Even common and mundane errors can raise challenging questions when given close scrutiny. “Straight clips,” like that seen in the accompanying 198x-D Lincoln cent, serve as an example.

Straight clips are often called “end-of-strip” clips, reflecting a widespread assumption that the incomplete planchets are derived from the leading or trailing end of the strip, at least when those ends are neatly trimmed. When a punch (blanking die) overlaps the end of the strip, it produces a blank whose normal circular outline is interrupted by a straight edge.

Given the limited source area, straight clips should be scarce. They should be much rarer than curved clips, which can come from anywhere within the strip. In fact, straight clips are quite common. In some years and denominations they exceed the number of curved clips. This is the case with 5-cent coins produced since 2002.

The abundance of straight clips suggests that many come from the sides of the strip, despite occasional protestations that the strips are too wide (relative to the array of blanking dies), and the potential for lateral play too limited, for the required overlap to occur.

Astute observers will have noticed a narrow groove paralleling the straight edge of our 198x-D cent. Often labeled as “incomplete straight clips,” these grooves occur on only one face and are said to preserve evidence of a failed attempt at slicing through the strip. However, these grooves are far too common, and their location far too consistent, to represent an aborted cut. The groove is more likely a scar from a “stop” or guide next to the blade. Alternatively, it could be a fissure demarcating the edge of a folded-over and struck-in burr produced by a dull cutting edge.

The gross contour and microscopic surface texture of straight clips are rather variable, ranging from smooth to rough to irregular. Different reported mechanisms like “guillotines,” “splitters,” “saws” and “shears” may be responsible. Our 198x-D cent shows a “cut-and-tear” texture that probably indicates an abrupt chopping action. Variability can also be caused by dulling, chipping, or breakage of the cutting edge.

A sawtooth contour runs along the cut edge of a 1981 Lincoln cent (see photo). It occurs in combination with a microscopic cut-and-tear texture. These kinds of straight clips are even called “sawtooth clips.” A slightly undulating groove runs parallel to the cut edge.

A somewhat butchered straight clip appears on a 1980-D cent (see photo). A sharp spur splays out from the edge, with pattern of sawtooth cuts farther south.

Straight clips can occur in combination with other kinds of clips and planchet errors. The illustrated 1955 Lincoln cent was struck on a tapered planchet that terminates in a straight clip. The terminal position of the clip is characteristic of such combinations.

Next up is a 1930s cent with both a straight clip and a curved clip.

The most desirable combination is two intersecting straight clips (no other combination of straight clips is known), as shown on a 1999-P Pennsylvania quarter dollar. Called “corner clips,” or “outside corner clips” they always show an obtuse angle of about 120 degrees (see photo). This probably means that the leading end of the strip is cut at an angle, to ease entry into the blanking press. The obtuse corner clips would therefore come from the trailing corner.