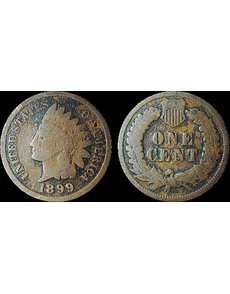 A storm knocked out the power at the author’s house just after he’d photographed this 1899 Indian Head cent. The resulting loss of electrical power had him sitting in the dark and wondering who might have owned the coin in 1899.

I had just finished photographing the 1899 Indian Head cent illustrating this month’s column and was copying the digital images from my camera’s memory card to the computer when ... POOFT! The room went dark.

In a split second I found myself sitting about 18 inches from a blank computer monitor that I could not see at all.

The winds were howling as they ripped through the stands of 100-foot-tall Douglas fir trees just to the east of my home.

Thousands of tiny brown needles blew loose from the tree’s branches ultimately coating everything with a layer of nature’s crumbs.

Heavy rain was propelled, parallel to the ground, as if the drops were shot from millions of minute cannons.

It was not a fit night out for man nor beast!

Instantly realizing that my ability to complete this column would have to be put on hold, I closed my eyes, got up from my chair, carefully walked into the living room and made my way to the sofa.

Somehow, I can see more clearly in the dark with my eyes closed. Anyway, I sat down, surrounded by nothingness.

Immediately I began to imagine that I was just thrust through a wormhole back in time to 1899. I wondered what it might have been like to have this coin.

When finding an unusual and very old coin in a roll, it is great fun to imagine where it may have been as it traveled through time.

Might this coin have been in Charles Murphy’s pocket when he earned his nickname in 1899?

It was on June 30 of that year that “Mile-a-Minute” Murphy became the first man to ride a bicycle for one mile in less than one minute.

This gentleman performed his feat by drafting behind a Long Island Rail Road boxcar that ran between Farmingdale and Babylon, N.Y., on Long Island.

Murphy persuaded the Long Island Rail Road to lay boards between the tracks to provide him with a relatively smooth surface on which to ride.

Or could this coin have been in a racer’s pocket during the first motorcycle race held July 29, 1899 on Manhattan Beach, N.Y.?

Maybe this 1-cent piece was used to purchase a copy of The New York Times in 1900?

Who knows? But I was able to add one sure thing to this extremely worn-out coin’s 113-year history. It was on my table during the first blackout in my neighborhood in October of 2012!

Please share your finds with me. Go to www.askaboutcoins.com and use the Submit Question button to send me an email.