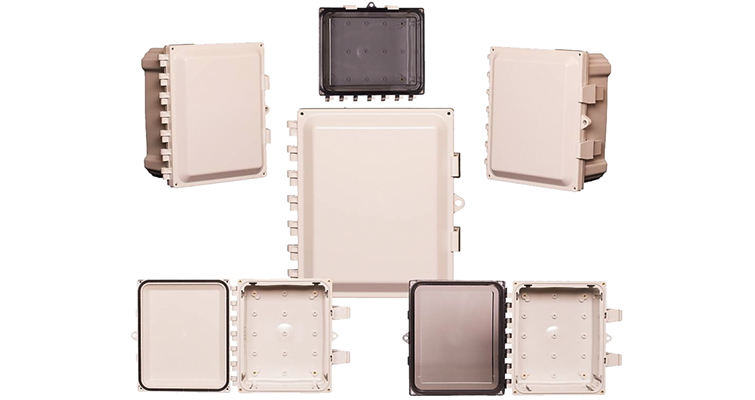 Attaboxes are designed for water-tight outdoor enclosures for electrical equipment. The neoprene gaskets are not considered safe if the box is used to store coins, but thegasket can be removed and replaced with a safe material. Image courtesy of www.attabox.com.

This month I would like to share with you a few email queries I received. One reader wrote:

“I was wondering if ‘Attaboxes’ are suitable for storing coins, medals and paper money if they are placed in a home safe? The box is described as being made from thermoplastic (injection molded) polycarbonate. I plan on storing my collection in an acid-free box and then putting it in the Attabox. If this is not safe, would you recommend using the metal bond boxes used in bank vaults and home safes instead?”

Good question. Attaboxes (www.attabox.com) are designed to provide a watertight outdoor enclosure for electrical equipment. The boxes are made from polycarbonate and then made watertight with a neoprene gasket. Polycarbonate is considered a “safe” material for intimate contact with collections, but neoprene is not.

I contacted the manufacturer and he said that their gaskets are removable and could be easily replaced with a different material.

So, if the reader removed the gasket and replaced it with a safe foam such as Volara (a closed cell polyethylene foam) the boxes would be fine for storing numismatic collections in a safe.

Alternatively, he could simply remove the gasket and use the box without one.

A bond box would be fine. These boxes are now also made from polypropylene, a safe plastic.

Another reader wrote with the following question:

“I know that PVC is bad for coins but what about Styrofoam? I have purchased some rolls of BU coins and, to keep the coins from rattling around, the seller placed a Styrofoam peanut on top of the coins. I have removed the peanut as I was not sure it was safe. Can you please advise."

Styrofoam is made from polystyrene and was invented in 1965. Polystyrene is considered to be a safe packing material for collections. I personally have issues with packing “peanuts” due to the static charge they create. As a packing material, I recommend making pillows out of them by placing them in resealable plastic bags.

A number of packing peanuts are advertised as “environmentally friendly.” These are made from a starch material. I have several concerns. If you are shipping something in a box packed with these peanuts and the box gets wet, the peanuts will dissolve into a gooey mess and stop providing the cushion they were designed to give. I personally do not think these peanuts belong near collections.

To test, take a peanut and put it under running water. If it sheds water it is Styrofoam, and if it melts away it is starch based.