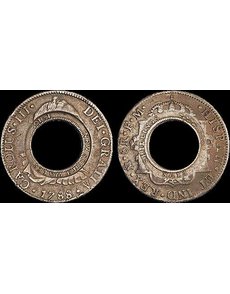 This 1813 Holey dollar from Australia is one of the coins Wyatt E. Yeager admitted to stealing from the ANA Museum. It was sold in a July 2007 auction in Australia for the equivalent of $191,082. The coin was returned to the ANA museum on Oct. 23.

The rare Australian 1813 “Holey dollar” of 5 shillings was returned to the American Numismatic Association’s Edward C. Rochette Money Museum on Oct. 23, according to ANA officials.

“We are delighted to have the ‘Holey dollar’ Spanish real returned to our museum collection,” ANA Executive Director Jeff Shevlin said.

The coin was stolen from the museum by former ANA Collections Manager Wyatt E. Yeager, who was sentenced in April to 27 months in federal prison and two years of supervised release, and ordered to pay $948,505 in restitution.

Coinworks Ltd., the Australian numismatic firm that returned the Holey dollar to the ANA, bought the coin at the auction. The company specializes in Australian rare coins and notes, according to the ANA news release.

“Coinworks is an organization that prides itself on its strong ethic and commitment to the industry. That Coinworks initiated the discussions regarding the return of the 1813 ‘Holey dollar’ to its rightful owner (ANA) is a clear demonstration of the principles by which we operate,” Belinda Downie of Coinworks said.

The Holey dollar is struck on a 1788 Spanish-American silver 8-real coin of Charles III struck in Mexico City. It has a large hole punched out in its center; around the hole on the obverse is the added text NEW SOUTH WALES 1813 and, on the reverse, FIVE SHILLINGS. About 350 Holey dollars, Australia’s first domestic coin, survive today, according to the ANA.

The Spanish 8-real coin (or dollar) was widely used by many countries as international currency because of its uniformity and milling characteristics. Some countries, like Australia, countersigned the Spanish dollar so it could be used as their local currency. In the United States, the Spanish dollar remained legal tender until the Coinage Act of 1857.

In a story published in the Jan. 30, 2012, issue of Coin World, when ANA officials publicly acknowledge the theft for the first time, ANA President Tom Hallenbeck “characterized the investigation and search for the stolen coins as complex and painstakingly slow.”

Hallenbeck told Coin World in January that the ANA’s museum staff noticed items were missing in October 2007, and an internal investigation was launched. Shortly after, local law enforcement and FBI officials were notified in Colorado. He noted that museum staff worked with authorities during the investigation and played a critical role in helping to uncover vital evidence in the case. He said the theft was kept confidential so as not to compromise the ongoing investigation, during which Yeager relocated to Ireland.

Three ANA staff members and outside consultants spent the first 10 months of 2010 conducting a complete inventory and appraisal of the numismatic holdings at the ANA museum, then ANA Executive Director Larry Shepherd reported during an Oct. 26, 2010, ANA Board of Governors meeting.

Shepherd told the board it was the first time that everything in the ANA Museum had been cataloged and a value determined for each item. At that time Shepherd said a conservative market value of the museum’s holdings was slightly more than $37 million.

During October 2010, the board hired Robert Wittman Inc., a security and recovery consulting firm that specializes in recovering stolen art and collectibles, to investigate and recover the stolen coins. The company’s founder and chief investigator, Robert K. Wittman, founded the FBI’s National Art Crime Team.

ANA officials said in January 2012 that they could identify the vast majority of stolen coins through photographs and descriptions of the coins obtained when they were accessioned.

All of the ANA coins stolen were “raw” (uncertified and not encapsulated in plastic holders) when stolen, although some were later certified and graded before Yeager consigned them to auction or sold them privately.

At the time of Yeager’s sentencing, Wittman told Coin World that his firm was actively investigating the case but that “because of the sheer immensity of the numbers we can’t go after every coin.”

According to a story published in the May 14, 2012, issue of Coin World, when Coin World asked Wittman “what, if any, steps have been taken to notify the buyers at auction of stolen coins consigned by Yeager, Wittman replied, ‘The ANA is not responsible for alerting people if they purchased a stolen coin; it is the responsibility of the possessor to figure out if the coin is stolen,’ adding, ‘the ANA is the victim here.’ ”

The ANA has also recovered several other stolen coins that were among the 38 coins and other items Yeager surrendered to the FBI. The ANA determined that 32 of the 38 pieces belong to the museum.

Among the other coins recovered is a Netherlands Brilliant Uncirculated 1946 gold pattern with Franklin Roosevelt portrait, several Mexican reales from the 15th to 17th centuries, a tetradrachm of Lysimachus from Thrace, and coins from Bolivia, Chile and Costa Rica.

In August 2009 the ANA received $750,000 in a negotiated settlement from its insurance carrier for losses incurred resulting from the theft of coins.

The ANA filed its claim with XL Specialty Insurance Co., New York City, in early 2008 after becoming aware of coins missing from the museum and after determining what ANA officials believed to be the number and value of the coins.

The settlement represented a negotiated compromise based on what ANA could then document with regard to the missing coins. The terms of the settlement establish that ANA will retain title to any of the stolen coins that may be recovered.

ANA officials said the insurance payment was placed in a dedicated museum fund. They acknowledged that some settlement funds may be used for recovery costs.

No money has been distributed from the dedicated museum fund, according to ANA officials.

According to the Oct. 23 ANA news release, upon their return, the coins were photographed, cataloged and returned to the museum’s vaults. The ANA upgraded its security and surveillance systems following the theft, with improvements including the installation of cameras and changes to its protocols for accessioning and deaccessioning items.

Funds used to upgrade the security system came from the ANA general fund. The ANA has also reinstated an on-duty security guard position at its Money Museum.

In the coming months, the museum also will hire additional part-time staff to catalog and photograph the ANA’s museum collection and to make museum resources available online to members.

Funding to pay the part-time staff will also come from the ANA general fund, according to ANA officials.“This project will take several years, but it is intended to secure this valuable ANA resource,” Shevlin said.

An updated list of coins stolen from the ANA Museum is posted at www.money.org/communications/museum-theft.aspx. If collectors are concerned that they may have purchased a stolen coin or if they have information about any of the coins on the stolen coin list at the ANA website, ANA officials request they contact the ANA at 719-482-9841. ¦