Still surprises out there 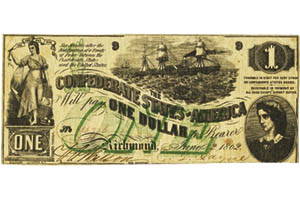 This 1862 $1 note issued by the Confederate States of America bears many standard vignettes used on notes of this period. The close-up image showing the maiden with shield vignette (located in the upper left corner of the note) shows a sun face on the shield similar to the coats of arms of two South American nations, at least in the eyes of the author.

No matter how much you think you know about a note, every once in a while something still catches you by surprise.

Take, for example, the 1862 Confederate States of America $1 notes. They were printed by Blanton Duncan, one of the Confederacy’s printers who was never too far from controversy.

Characteristically, Blanton Duncan reportedly decided that the first $1 note issued by the CSA should have enhanced protection against counterfeiting. He accomplished this by adding a green 1 ONE protector.

This added another step to the printing process (each color had to be printed separately) and, therefore, also added cost.

The rest of the run of more than 2 million notes was produced without the green protector.

That’s all well and good, but I don’t know how many people have taken a close look at the vignette on the left end of the note that appears to be a maiden holding a shield.

“So?” you might wonder. Maiden-holding-shield vignettes, after all, seemed to be a dime a dozen during the antebellum period. But this one, I found, is a little different.

Look closely at the shield. Right there is a sun face, a rather peculiar thing to find on a shield any self-respecting maiden of the day would be holding.

A little poking around suggests that this appears to have some connection to the national coats of arms of either Argentina or Uruguay, at least to my eyes.

But why would Duncan or some other official pick a vignette incorporating the coat of arms of some South American country? The answer is probably that the vignette was a stock cut that happened to be available and was deemed attractive enough to make do.

The objective was, after all, to get these notes into circulation as quickly as possible. So, even if this were an unusual selection, not many would have had any idea about the South American connection and fewer still would care about it, even if they did know.

But, you know collectors; we like to delve into the minutia and wonder, “Why would they do that?”

Often times the simple answer is: