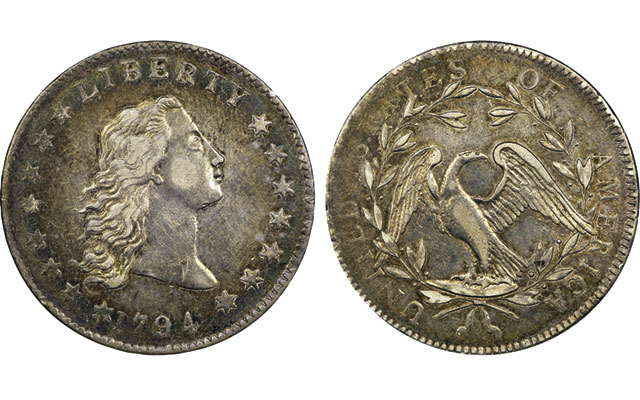 The Matthew A. Stickney specimen of 1794 Flowing Hair dollar realized $470,000 in Heritage Auctions' Part V Sale Nov. 14 and 15 of Selections from the Eric P. Newman Collection.

The 965-lot sale, in which all lots were recorded sold, brought total prices realized of $10,409,054, which includes the 17.5 percent buyer's premium added to the final hammer price of each lot won. The five Newman auctions to date to benefit the Eric P. Newman Numismatic Education Society have generated combined prices realized of more than $55 million.

The Stickney 1794 dollar sold in the Newman sale is graded About Uncirculated 50 by Numismatic Guaranty Corp. and stickered by Certified Acceptance Corp.

The 1794 dollar was first recorded sold at auction in Philadelphia dealer Henry Chapman’s June 25 to 29, 1907, sale of the Matthew A. Stickney Collection.

Also once part of Col. Green’s collection, from whose estate Newman acquired the coin in the early 1940s, it was one of a reported 2,000 silver dollars dated 1794 struck at the U.S. Mint in Philadelphia. Only 1,758 of the total number of silver dollars struck were delivered Oct. 15, 1794, to the Mint’s treasurer, Nicholas Way, by Chief Coiner Henry Voigt. The remaining 242 coins from the production were deemed unacceptable for release.