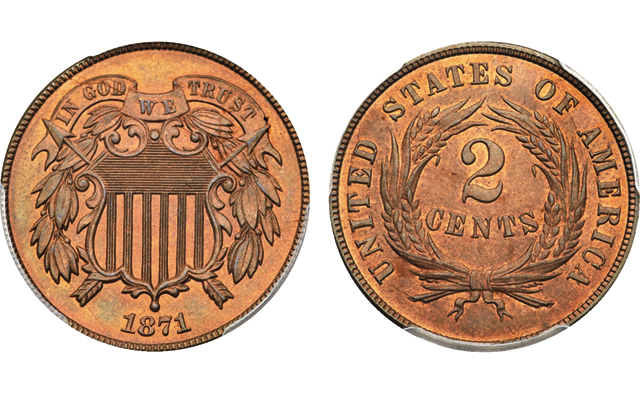 Regarding quality, he reminds collectors to buy the coin and not the holder, meaning that collectors should make evaluations on quality for themselves, although he does recommend buying coins with Certified Acceptance Corp. stickers that indicate quality within the grade when possible.

Here is one of three analyses of recently sold 2-cent coins from the collection:

The story: The consignor described this piece as the most difficult coin to acquire in the set, and it realized more than he expected at $1,650.88.

It is from an issue with a relatively low mintage of 721,250 pieces and the description noted that it is “elusive at the Gem level” regardless of the color designation. PCGS has graded 33 in MS-65 red and brown with none finer in this color designation.

This example has a green CAC sticker. A different example graded by PCGS in the same grade without a CAC sticker sold for $1,410 at a July 13 Heritage auction.

Another example graded MS-66 red and brown by Numismatic Guaranty Corp. and with a green CAC sticker sold for $4,700 at Heritage’s Nov. 15, 2013, Eric P. Newman auction.