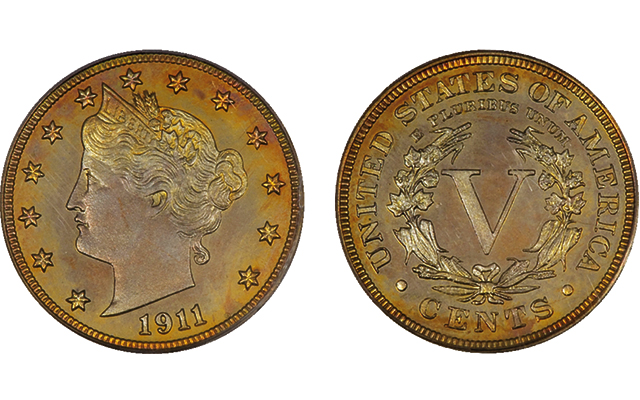 Here is one of three examples, sold at recent auctions, that teach different lessons about valuing CAC gold-stickered coins:

The story: Nice Proof Liberty Head 5-cent pieces aren’t especially hard to come by. Each major auction will likely have several, if not dozens, to select from. Finding ones with cameo contrast is more of a challenge, as is finding an example without carbon spotting.

Add cameo contrast between the fields and devices, and the issue becomes much scarcer, with examples trading at the $700 level in Proof 65 Cameo. A Professional Coin Grading Service Proof 66 Cameo example sold for $1,046 at a recent GreatCollections.com auction.

The $2,702.50 that a PCGS Proof 65 Cameo 1911 Liberty Head 5-cent piece with a gold CAC sticker brought at Legend Auctions’ July 17 auction puts it right between what recent Proof 66 Cameo and Proof 67 Cameo pieces have sold for recently.

The catalog noted the coin’s tremendous eye appeal as a result of beautiful toning, stating, “Icy mirrors are deep, clear, clean, and have bold reflectivity, while gorgeous pastels swirl all over."