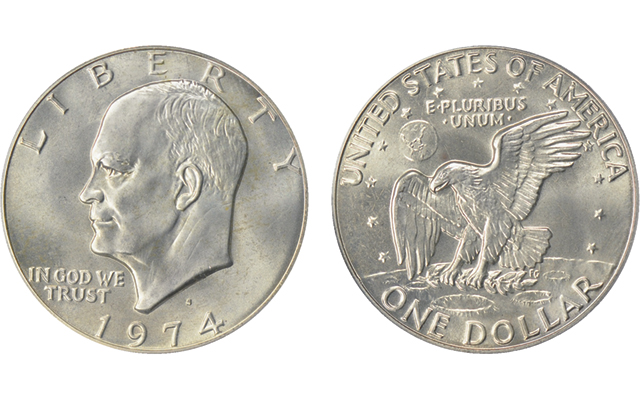 The story: Few coins are as much of a wild-card as this 40 percent silver 1974-S Eisenhower dollar in an old “doily” style PCGS holder, graded MS-66 with a gold CAC sticker. It sold for a strong $286 at a May 25 GreatCollections.com auction.

The Eisenhower silver-copper clad dollar was produced for collectors, so it “comes nice,” with PCGS certifying nearly 8,000 examples at or above the MS-66 level.

The demand for the present coin came from several different areas. First, Eisenhower dollar collectors are enthusiastic in their pursuit, and the type is infrequently found in this style holder, which pre-dates the popularity of certified modern coins. Second, CAC gold stickers are infrequently seen on Eisenhower dollars.

Especially when one considers that the present coin sold for substantially more than even an MS-68 example, one has to surmise that the rarity of the holder, rather than the coin itself, is the reason. Only three MS-69 examples of the issue have been graded by PCGS and one of these sold for $7,475 at a January 2012 Heritage auction.