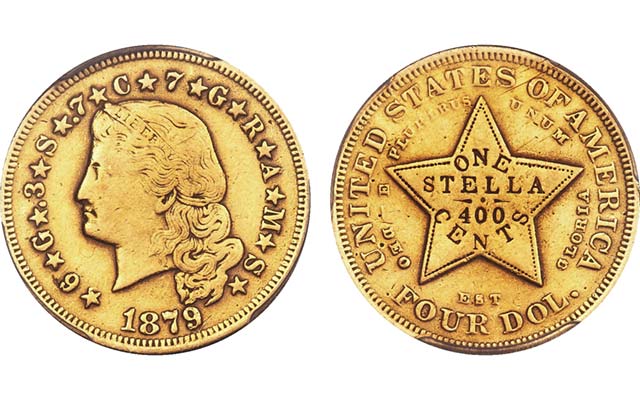 One of the top lots is one of just nine known 1880 Coiled Hair $4 Stella patterns, listed as Judd 1660 and Pollock 1860 in the standard references to the pattern series by J. Hewitt Judd and Andrew Pollock.

Graded Proof 65 by Professional Coin Grading Service with a green Certified Acceptance Corp. sticker indicating quality within the grade, it follows Heritage’s April 23 auction of another example graded Proof 67 by Numismatic Guaranty Corp. with a green CAC sticker for a substantial $1,821,250 at the Central States Numismatic Society convention auction.

The present example is considered the third or fourth finest known of the nine confirmed examples. In the catalog provenance the first recorded offering was in B. Max Mehl’s 1947 auction of the Will Neil Collection where it was sold as part of a set of four $4 Stellas for $3,850. This set later sold at Stack’s August 1976 American Numismatic Association auction for $225,000.

The finest of the nine known is the Delp specimen, graded NGC Proof 67 Cameo. It last sold as part of Bonham’s September 2013 auction of the Tacasyl Collection where it sold for $2,574,000.

Heritage will also offer in its June Long Beach auction an 1880 $4 Flowing Hair Stella, Judd 1657 and Pollock 1857, graded Proof 65 by NGC with a green CAC sticker. That example is one of just 19 confirmed for the issue. It fits in the upper-middle of the condition census, tied with four other NGC Proof 65 pieces and bettered by three other examples including one graded PCGS Proof 66 that sold for $517,000 at Heritage’s April 23 CSNS auction.

Those with more modest (but still ample) budgets may be tempted by an 1879 Flowing Hair Stella, Judd 1635 and Pollock 1833, graded Proof, Very Fine Details, Repaired, by PCGS.  Heritage writes that of the four main varieties, “The 1879 Flowing Hair variety is the most frequently seen, as these were the coins struck in quantity and distributed to Congressman in sets along with an example each of the Goloid Metric Dollars Judd-1617 and -1626 at a cost of $6.10. Later, additional sets were sold to collectors at a cost of $15.00 per set.”

This example, perhaps carried as a pocket piece or a piece of jewelry, has had its fields smoothed. Heritage concludes, “This piece ranks among only a handful of stellas that can in any way be termed ‘affordable,’ and represents an unequivocally important opportunity for the budget-conscious collector to acquire an example of this historically significant issue.”