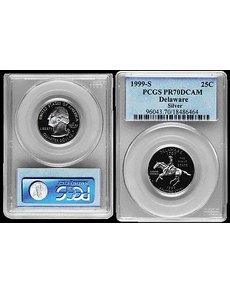 The 50 States Quarter Program gave people a reason to look at their pocket change and provided a series for collectors rich in opportunity.

The 50 quarter dollars honoring each state, along with six quarters honoring the District of Columbia and U.S. territories, were struck for circulation between 1999 and 2009 from the Philadelphia and Denver Mints. Proof issues in 90 percent silver and copper-nickel clad compositions were struck at the San Francisco Mint.

For circulation-strike Mint State issues, only a few issues trade for hearty premiums over face value. The 2003-P and 2003-D Illinois quarters trade for roughly double what the other 2003 issues sell for. The 2009-P and 2009-D Virgin Islands issues enjoy similar premiums in the marketplace as does the 2002-D Tennessee issue.

The most expensive regular examples in the series are the five Proof 1999-S silver quarters, followed by Proof 2001 silver quarters. Proof 1999 silver quarters can trade at the $25 level and the 2001 issues at the $10 level. Common Proof 2000 silver issues can be easily found for around $6. Starting in 2003, the U.S. Mint struck five-coin sets of Proof silver quarters, which served to increase mintages and decrease the rarity of these issues from 2003 onward.

The only real keys of the series are the well-known 2004-D Wisconsin Extra Leaf High and Low variants.

These feature a curious extra leaf, often described as a die gouge, on the ear of corn on the reverse. Examples of both types in circulated condition can regularly be found in online auctions for less than $100 and occasionally Coin World readers report finding an example in change.

On Oct. 14, an Extra Leaf Low example certified Mint State 64 sold for just $100 in an online auction. In contrast, an Extra Leaf High example in MS-64 typically may realize around $200 when offered at auction.

The most expensive issues in the State Quarter Program at auction are driven by collectors trying to build winning collections in grading service registry sets.

However, as more examples were certified by PCGS in this perfect grade, the rarity declined along with prices. Another similarly graded example offered by Heritage on Dec. 9, 2011, sold for $2,107.95. The 2011 result still represents a strong price when one sees that Proof 69 Deep Cameo pieces bring around $30. ¦