The Joys of Collecting: Mania begins for coin collecting 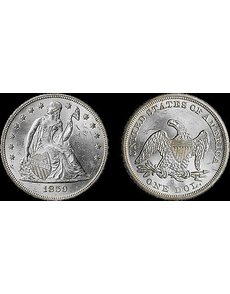 The author takes you back to the year when the illustrated coin, an 1859-O Seated Liberty silver dollar, was freshly minted.

The other day when I was looking through my files, I came across an article, “Rare Coins,” published in the November 1859 issue of the widely-read Hunt’s Merchants’ Magazine. At that time, the hobby was in a rapid growth period catalyzed by the discontinuation of large copper cents in 1857.

I usually write my own columns, but now, with a nod to an unknown author of 1859, I reprint the text:

“There has been prevalent in this country, for more than a year past, a disease, which may be better termed a mania, for collecting coins. It has seized on all classes of the community, on all ages, and on both sexes. For the past three months it has not been so severe, and there is a manifest falling off in the number of cases, but as the cool season approaches it again revives. The attention of collectors has been generally devoted to American coins and coinage; but the coins of all nations have come in for their share of notice.

“Perhaps there is no more pardonable mania. There can be little doubt that coins and medals are the most valuable historical monuments, and that a boy will fix more dates and facts in his mind if he be allowed to connect dates and facts with a cabinet of his own collection, than he will by years of mere study in books.

“The American series of coins would seem to contain a very small number, and one would suppose that the entire list of varieties would be very easily filled up by any collector. But this is far from true. There are, in fact, many hundred varieties of coins belonging to the American series, commencing with the Somers Islands piece, struck for the Bermudas in the seventeenth century, for which now a fabulous price would be readily paid, and ending with the nickel cent of 1859. The subject is one of no small interest. The colonial coins, as they are commonly called, are many, and some of them are of great rarity. All of them have more or less immediate connection with the early history of the country; and a glance over a cabinet which is well supplied with these coins will repay anyone interested in American history.

“There are coins struck by France for Louisiana; coins struck by England for the entire country, but which obtained circulation only in the Carolinas; coins struck by the several states before the federal mint was established, and pattern pieces and Washington coins, as they are called, in great variety.”