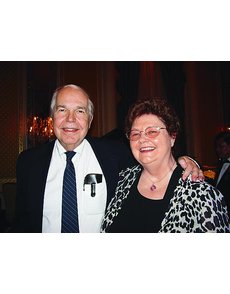 The author, left, is shown with Beth Deisher during the American Numismatic Society’s Gala on Jan. 12, 2006, in New York City during which he was honored.

Beth Deisher announced her retirement effective April 30 as editor of Coin World, following distinguished service in that post since March 1, 1985. Now she will take time to travel and catch up with personal things, while Steve Roach supervises the publication. Here’s wishing Steve a generation of success and enjoyment.

Reminiscing about knowing Beth, since 1985 we have been in constant touch on several levels. I was president of the American Numismatic Association that first year, having been in the post since 1983. Beth had lots of questions, and I did my best to answer all.

There were no secrets within the ANA Board of Governors, and except for executive sessions she was invited to sit in on meetings, which she did. Often, like her predecessor, Margo Russell, Beth was the only person in the audience.

It was a wonderful for Beth in 2010 to receive the ANA’s highest honor, the Farran Zerbe Award.

Last summer, she was master of ceremonies at the Hall of Fame dedication in Colorado Springs, Colo. The Hall of Fame is a wonderful but somewhat peculiar institution, inasmuch as in recent years very few people have been enshrined. I have been working with chair Cliff Mishler to increase the number of living honorees from only about a dozen to, say, two or three dozen. As a nominator next year, I will propose Beth Deisher, likely a shoo-in.

Another interface with Beth has been in professional numismatics. During her tenure, I and my staff at Bowers and Merena Galleries have worked hand in glove with news releases, inside stories on the Eliasberg, Childs, Bass and other great auctions (in 1996 I was auctioneer at the podium when the very first coin broke the $1 million mark — a sensational news event), fact checking, the SS Central America treasure publicity, contributing to the Coin World Almanac, and more. It was lots of fun and memorable. When I was honored by a Gala held at the Waldorf-Astoria by the American Numismatic Society in 2006, Beth traveled to New York to share her comments about me to the audience.

I could recount many things about Beth and events over the years, but this is one of my favorites:

Early in her editorship, I went to the Florida United Numismatists convention in Florida. When I came back home I wrote about my experiences, starting with something like this:

“Upon entering the dealer bourse I was confronted by predators.” I went on to describe buying and selling, and so on, then ended the column: “The predators I mentioned were a special wildlife exhibit of Florida animals set up as an attraction at the entrance.”

I thought this was funny, but Beth felt it was non-numismatic.

Today, I suppose I could get away with it if I said that some of these predators can be seen on modern commemorative coins.