Start of slide or opportunity? 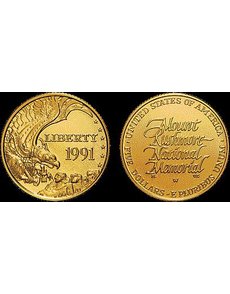 This Uncirculated 1991-W Mount Rushmore Golden Anniversary gold $5 half eagle is one of the many collectible modern era U.S. Mint issues with a value that is almost entirely dependent on the .24187 ounce of gold it contains.

After the most recent dip, Citigroup lowered its ratings on several gold mining companies and wrote in a report, “The problem with gold is that it is a very ‘long cycle’ metal and if it IS in the process of peaking now, then history suggests that it could go into hibernation for a long, long time.”

An impetus for the recent sell-off was the release of the January 2013 meeting minutes of the Federal Reserve’s policy committee. The report suggested that it may scale back its monetary stimulus. This reduced gold’s appeal as an inflation-hedge.

The drop below the psychological barrier of $1,600 an ounce was also caused in part by economic data showing that the U.S. economy is slowly improving and a growing perception that the global economy has stabilized. This stability can lead people away from assets like gold and silver, and toward assets perceived as riskier.

Some people saw buying opportunities in the quick drop. APMEX’s Bullion Center on eBay reported that it enjoyed its second best sales day on Feb. 20, stating in a press release that buyers concluded that “precious metals were on sale and at a discount relative to the expected future values.”

Wild price swings have the greatest impact on coins that trade at levels close to bullion. This group includes both traditional bullion products and many collector coins with values closely tied to bullion.

A quick drop in the price of gold can have a big impact on dealers big and small who are working on a tight profit margin with bullion products. ¦