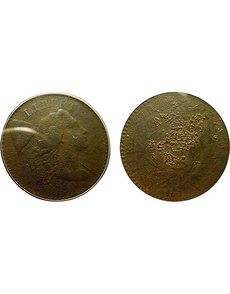 ANACS has authenticated this 1794 Liberty Cap, Starred Reverse cent as genuine. Obverse image shows glare from being photographed through an ANACS plastic slab.

An astute Pennsylvania coin auctioneer's belief that a consignor's collection contained a rare large cent variety resulted in the coin being submitted and professionally certified as a genuine 1794 Liberty Cap, Starred Reverse cent.

The coin was excavated by its owner years ago while metal detecting, but he was unaware that it was a rare variety. The coin is one of between 50 and 60 examples known of the die variety, classified as Sheldon 48 in Penny Whimsy by William H. Sheldon.

ANACS authenticated and encapsulated the coin as “Good 4 Details, Corroded.”

The variety is referred to as a Starred Reverse because of the minute 94 five-pointed stars that encircle the coin between or partially covered by the 83 dentils on the border. The purpose of the stars is unknown.

The Starred Reverse cent is one of the classic rarities in the early large cents. Knowledgeable collectors finding a 1794 Liberty Cap cent and recognizing the Young Head portrait will quickly turn the coin over to examine the reverse for evidence of the stars. The same obverse was used for the S-47, S-49 and NC-9 (noncollectible) varieties, but only the S-48 marriage features the Starred Reverse. The obverse can be identified by two dentils that are conjoined below and to the left of the numeral 1 in the date.

While the majority of U.S. coins depict stars, stars have been used infrequently as a completely encircling border device. Stars were first used as a border device on the 1792 quarter dollar patterns, Judd 12 and Judd 13 (United States Pattern Coins, Experimental & Trial Pieces by J. Hewitt Judd, edited by Q. David Bowers). Those patterns (Judd 12 in copper; Judd 13 in white metal) have 87 stars along the border on the reverse.

The number of 1794 Liberty Cap, Starred Reverse cents is unknown. The reported mintage of 1794 cents is 918,521 representing all die varieties.

The auctioneer for the new discovery, Russell S. Wolfe Jr. from Myerstown, said the coin was sold in his May 21 auction in Lebanon, Pa., for $5,500, to a Pennsylvania dealer, Ray Copenhaver, from Copenhaver Coin Exchange in Hummelstown.

Copenhaver, who said he enjoys collecting pieces with interesting stories behind them, plans to hold on to the coin for the time being.

Wolfe, with 32 years of experience in numismatics, including conducting auctions offering all types of items since 1989, said a collector in his 70s had brought his collection to Wolfe for consignment to his next available auction.

Wolfe said that at no time did the collector indicate that he might have any rarities within the consignment. Wolfe said while cataloging each of the coins in the consignment for the auction, he stopped when he inspected the heavily corroded cent that he suspected to be the S-48 1794 Liberty Cap, Starred Reverse cent.

ANACS Senior Numismatist Michael Fahey said he was able to quickly identify the obverse as being the correct portrait. He said despite the corrosion and heavy wear, a sufficient number of stars are still visible and positioned in the correct orientation to enable the coin to be certified as a genuine S-48 variety.