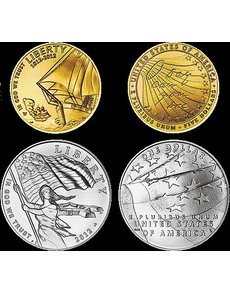 Starting March 5, the U.S. Mint will offer the silver dollars in Proof and Uncirculated versions for 30 days at introductory prices. Regular pricing becomes effective when the introductory period ends at 5 p.m. Eastern Time April 5; regular issue prices will be in effect through mid-December 2012.

The Proof and Uncirculated half eagles will be market-priced weekly according to a gold-pricing grid based on the spot price of gold on the London market. The pricing grid will be used for all gold commemorative coin ordering options.

The configuration for the set is still under development, according to Tom Jurkowsky, director of the U.S. Mint’s Office of Public Affairs.

Also to be offered beginning March 5 is a two-coin Proof set containing a half eagle and a silver dollar. The set will be offered at an initial price of $579.30, with pricing to be adjusted weekly as necessary.

A limit of 50 two-coin Proof sets per household will be in effect for the first week of the program, and re-evaluated weekly to determine whether to extend, adjust or remove the ordering restrictions.

Surcharges included in the pricing for all options — $35 for each gold coin and $10 for each silver coin — are authorized, after the Mint recoups its production costs, to be paid to the Maryland War of 1812 Bicentennial Commission in support of the Bicentennial events, outreach and preservation of War of 1812-related sites.

The gold and silver coin designs are emblematic of the War of 1812, particularly the Battle of Baltimore that served as the basis of the lyrics of “The Star-Spangled Banner” — the National Anthem.

The obverse of the half eagle features a naval battle scene from the War of 1812, with an American sailing ship in the foreground and a damaged and fleeing British ship in the background.

The half eagle’s reverse was designed by AIP Master Designer Richard Masters and sculptured by Menna.

Both the Proof and Uncirculated versions of the silver dollar are being struck at the Philadelphia Mint and bear the P Mint mark.

Both the Proof and Uncirculated half eagles are being struck at the West Point Mint and carry the W Mint mark. ¦